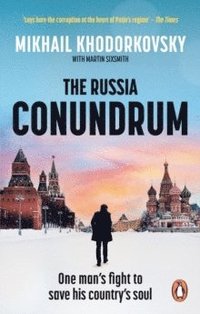 av Mikhail Khodorkovsky, Martin Sixsmith
Häftad Engelska, 2023-04-27
132
Bevaka
Spara som favorit
Ännu ej utkommen – klicka "Bevaka" för att få ett mejl så fort boken boken går att köpa.
Finns även som
Visa alla 4 format & utgåvor
'I'm a fairly calm fellow; I don't usually get het up about things. But I was, let's say, concerned when I tuned into the Moscow Echo radio station and heard that the Kremlin had put a price on my head. The announcement didn't quite say 'dead or alive'. But it came close...' Mikhail Khodorkovsky, March 2021 Mikhail Khodorkovsky has seen behind the mask of Vladimir Putin. Once an oil tycoon and the richest man in Russia, Khodorkovsky spoke out against the corruption of Putin's regime - and was punished by the Kremlin, stripped of his entire wealth and jailed for over ten years. Now freed, working as a pro-democracy campaigner in enforced exile, Khodorkovsky brings us the insider's battle to save his country's soul. Offering an urgent analysis of what has gone wrong with Putin, The Russia Conundrum maps the country's rise and fall against Khodorkovsky's own journey, from Soviet youth to international oil executive, powerful insider to political dissident, and now a high-profile voice seeking to reconcile East and West. With unparalleled insight, written with Sunday Times bestselling author Martin Sixsmith, The Russia Conundrum exposes the desires and damning truths of Putin's Russia, and provides an answer to the West on how it must challenge the Kremlin - in order to pave the way for a better future.
Visa hela texten

Mikhail Khodorkovsky (Author) In the early 2000s, Mikhail Khodorkovsky was one of the wealthiest men in Russia, the head of the giant Yukos oil company, ranked 16th on Forbes list of world billionaires. But his pro-democracy, anti-corruption views led to a clash with President Vladimir Putin, who had him arrested in 2003. Convicted on politically motivated fraud charges, Khodorkovsky spent ten years in Putin's prison camps, recognised by Amnesty International as a prisoner of conscience. Since his release in December 2013, Mikhail Khodorkovsky has lived in exile in Switzerland and in the UK. He is the founder of the Open Russia movement, promoting political reform in Russia, including free and fair elections, the protection of journalists and activists, the rule of law and media independence. He has been described by The Economist as 'the Kremlin's leading critic-in-exile.' Martin Sixsmith (Author) Martin Sixsmith studied Russian at Oxford, Leningrad and the Sorbonne. He was a Slavics Tutor at Harvard and wrote his postgraduate thesis about Russian poetry. From 1980 to 1997 he was the BBC's correspondent in Moscow, Washington, Brussels and Warsaw. From 1997 to 2002 he worked for the British government as Director of Communications and Press Secretary to several cabinet ministers. He is now a writer, presenter and journalist. He is the author of non-fiction titles including Russia - the Wild East, Putin's Oil, The Litvinenko File and The War of Nerves. His bestselling 2009 book, The Lost Child of Philomena Lee, was adapted for film and became the multiple Oscar-nominated Philomena, starring Steve Coogan and Judi Dench.