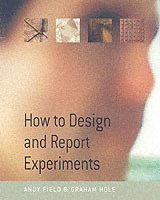 How to Design and Report Experiments

av Andy Field
Häftad Engelska, 2002-12-01
435
Köp
Spara som favorit
Finns även som
Visa alla 1 format & utgåvor
How to Design and Report Experiments is the perfect textbook and guide to the often bewildering world of experimental design and statistics. It provides a complete map of the entire process beginning with how to get ideas about research, how to refine your research question and the actual design of the experiment, leading on to statistical procedure and assistance with writing up of results.

While many books look at the fundamentals of doing successful experiments and include good coverage of statistical techniques, this book very importantly considers the process in chronological order with specific attention given to effective design in the context of likely methods needed and expected results. Without full assessment of these aspects, the experience and results may not end up being as positive as one might have hoped. Ample coverage is then also provided of statistical data analysis, a hazardous journey in itself, and the reporting of findings, with numerous examples and helpful tips of common downfalls throughout.

Combining light humour, empathy with solid practical guidance to ensure a positive experience overall, How to Design and Report Experiments will be essential reading for students in psychology and those in cognate disciplines with an experimental focus or content in research methods courses.
Visa hela texten

This book is highly recommended for Undergraduate and Postgraduate students and even trainee clinical psychologists who need a quick revision of statistical concepts and experimental designs. My only regret was not purchasing this book during my early Undergraduate years, I have read and re-read countless books on the same phenomena, and despite the detail these books comprise of, they have never been able to impact on me the way this book has. Without sounding too much like a clich, if your only ever going to buy one statistical and research book, it has to be this one. Consider this the bible of all things statistically related!
M. L
Psych Me Up!

I strongly recommend this book. The all-important steps of defining the research question and choosing an appropriate method are clearly written by these experienced authors and by doing so provide a framework, which if followed, would avoid many of the common difficulties encountered by those in training. The book is a succinct, clear, and readable treatise on this extremely important area. It should prove to be invaluable to researchers, practicing social scientists, students and anyone involved in the design and reporting of experiments
Social Psychological Review

Andy Field is Professor of Quantitative Methods at the University of Sussex. He has published widely (100+ research papers, 29 book chapters, and 17 books in various editions) in the areas of child anxiety and psychological methods and statistics. His current research interests focus on barriers to learning mathematics and statistics.

He is internationally known as a statistics educator. He has written several widely used statistics textbooks including Discovering Statistics Using IBM SPSS Statistics (winner of the 2007 British Psychological Society book award), Discovering Statistics Using R, and An Adventure in Statistics (shortlisted for the British Psychological Society book award, 2017; British Book Design and Production Awards, primary, secondary and tertiary education category, 2016; and the Association of Learned & Professional Society Publishers Award for innovation in publishing, 2016), which teaches statistics through a fictional narrative and uses graphic novel elements. He has also written the adventr and discovr packages for the statistics software R that teach statistics and R through interactive tutorials.

His uncontrollable enthusiasm for teaching statistics to psychologists has led to teaching awards from the University of Sussex (2001, 2015, 2016, 2018, 2019), the British Psychological Society (2006) and a prestigious UK National Teaching fellowship (2010).

He's done the usual academic things: had grants, been on editorial boards, done lots of admin/service but he finds it tedious trying to remember this stuff. None of them matter anyway because in the unlikely event that you've ever heard of him it'll be as the 'Stats book guy'. In his spare time, he plays the drums very noisily in a heavy metal band, and walks his cocker spaniel, both of which he finds therapeutic.