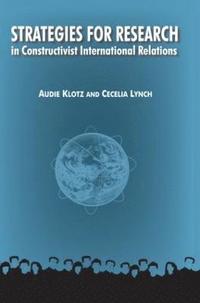 av Audie Klotz, Cecelia M Lynch
Häftad Engelska, 2007-02-01
598
Köp
Spara som favorit
Finns även som
Visa alla 3 format & utgåvor
Constructivism's basic premise - that individuals and groups are shaped by their world but can also change it - may seem intuitively true. Yet this process-oriented approach can be more difficult to apply than structural or rational choice frameworks. Based on their own experiences and exemplars from the IR literature, well-known authors Audie Klotz and Cecelia Lynch lay out concepts and tools for anyone seeking to apply the constructivist approach in research. Written in jargon-free prose and relevant across the social sciences, this book is essential for anyone trying to sort out appropriate methods for empirical research.
Visa hela texten

"Rather than approaching constructivism in terms of a turf to be defended or attacked, Klotz and Lynch have done an admirable job in going straight to the core issues. In a very concise and accessible way, they present constructivism through four theoretical reference points, while showing the variety of research designs and methodologies at its disposal. This is most welcome for students who wish to get a first and better grasp of the logic and variety of constructivist scholarship." - Stefano Guzzini, Uppsala University and the Danish Institute for International Studies, Copenhagen"