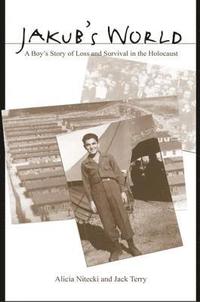 A Boy's Story of Loss and Survival in the Holocaust

av Alicia Nitecki, Jack Terry
Inbunden Engelska, 2005-04-01
1469
Köp
Spara som favorit
When German troops come to the small village of Belzyce, Poland, in 1939, nine-year-old Jakub Szabmacher's world is forever changed. At first the humiliations inflicted by the Germans seem small, but the conditions worsen until eventually Jakub's family and much of his village are murdered, and he is sent to various concentration camps in Poland and Germany, where he struggles to survive the terrible conditions of camp life. Finally liberated in 1945 from the concentration camp in Flossenburg, Germany, Jakub is befriended by American troops and with their help brought to the United States, where he takes the name Jack Terry. Coauthor Alicia Nitecki, whose grandfather was also imprisoned at Flossenburg, uses Terry's personal memories to tell young Jakub's story, as well as unpublished memoirs, private letters, and interviews with former inmates of the Flossenburg concentration camp and the townspeople of Belzyce and Flossenburg. Part history, part autobiography. "Jakub's World offers an anguished young boy's perspective on the Holocaust.
Visa hela texten