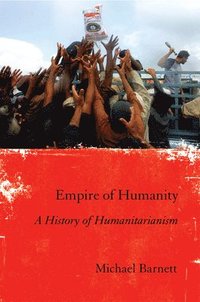 A History of Humanitarianism

av Michael Barnett
Häftad Engelska, 2013-01-03
285
Köp
Spara som favorit
Finns även som
Visa alla 1 format & utgåvor
Empire of Humanity explores humanitarianism's remarkable growth from its humble origins in the early nineteenth century to its current prominence in global life. In contrast to most contemporary accounts of humanitarianism that concentrate on the last two decades, Michael Barnett ties the past to the present, connecting the antislavery and missionary movements of the nineteenth century to today's peacebuilding missions, the Cold War interventions in places like Biafra and Cambodia to post-Cold War humanitarian operations in regions such as the Great Lakes of Africa and the Balkans; and the creation of the International Committee of the Red Cross in 1863 to the emergence of the major international humanitarian organizations of the twentieth century. Based on extensive archival work, close encounters with many of today's leading international agencies, and interviews with dozens of aid workers in the field and at headquarters, Empire of Humanity provides a history that is both global and intimate. Avoiding both romanticism and cynicism, Empire of Humanity explores humanitarianism's enduring themes, trends, and, most strikingly, ethical ambiguities. Humanitarianism hopes to change the world, but the world has left its mark on humanitarianism. Humanitarianism has undergone three distinct global ages-imperial, postcolonial, and liberal-each of which has shaped what humanitarianism can do and what it is. The world has produced not one humanitarianism, but instead varieties of humanitarianism. Furthermore, Barnett observes that the world of humanitarianism is divided between an emergency camp that wants to save lives and nothing else and an alchemist camp that wants to remove the causes of suffering. These camps offer different visions of what are the purpose and principles of humanitarianism, and, accordingly respond differently to the same global challenges and humanitarianism emergencies. Humanitarianism has developed a metropolis of global institutions of care, amounting to a global governance of humanity. This humanitarian governance, Barnett observes, is an empire of humanity: it exercises power over the very individuals it hopes to emancipate. Although many use humanitarianism as a symbol of moral progress, Barnett provocatively argues that humanitarianism has undergone its most impressive gains after moments of radical inhumanity, when the "international community" believes that it must atone for its sins and reduce the breach between what we do and who we think we are. Humanitarianism is not only about the needs of its beneficiaries; it also is about the needs of the compassionate.
Visa hela texten

Michael Barnett... through careful historical investigation and analysis... deftly addresses key dilemmas whose roots run deep throughout humanitarianism's history but which are often attributed to contemporary emergency relief and development, including the tensions between humanitarian principles and politics, the effects of market influences on humanitarianism, and the nature of humanitarianism's power over others.... Ultimately Empire of Humanity reminds us that while faith in the humanitarian imperative is crucial to realizing moral progress, the power of compassion can result in colossal failings. These failings, however, do not mean that humanitarianism is a hapless enterprise. Rather, they are the turning points that mark incremental advances, reform, and innovation that will enable humanitarian actors to not just be good but also to genuinely do good. -- Melissa Labonte * Political Science Quarterly * Michael Barnett'sEmpire of Humanity: a History of Humanitarianismprovides an insightful analysis of humanitarianism and humanitarian action focusing on its evolution and globalization especially after World War II.. This is thus a fundamental book for all those who work with humanitarian issues, both academics and practitioners, since it not only explores with rigor and detail the main trends of humanitarian action, but also because it sheds light on the most urgent and important challenges and dilemmas to be addressed when it comes to reinforcing and improving the international humanitarian system. -- Daniela Nascimento * Human Rights Review * One of the most striking features of world politics in the last 200 years was the rise of humanitarianism.... Barnett paints an expansive portrait of that ascent... [contending] that humanitarianism is a 'creature of the world it aspires to civilize,' rather than some sort of abstract ideal.... In making that argument, he includes rich details about the visionaries, missionaries, transnational activists, UN agencies, and democracies that intervened in such places as Nigeria, Cambodia, and Kosovo. -- G. John Ikenberry * Foreign Affairs * This is a history of humanitarianism-its ideas, practices, problems, and institutions. Whereas most other accounts of humanitarianism focus on recent initiatives, Barnett begins his historical account with the antislavery and missionary movements of the 19th century. He argues that humanitarianism has gone through three distinct stages: the imperial form (1800-1945), the neohumanitarian form (1945-89), and the liberal form (1989-present), with most institutional development occurring in the post-WW II era.... A strength of this study is that it critiques humanitarian initiatives in light of the historical conditions in which such activities take place. This nuanced, compelling book is strongly recommended. Summing Up: Highly recommended for all readership levels. * Choice *

Michael Barnett is University Professor of International Affairs and Political Science at The George Washington University. He is author of Eyewitness to a Genocide and coeditor of Humanitarianism in Question, both from Cornell.