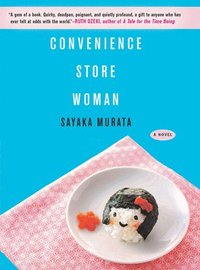 av Sayaka Murata
Häftad Engelska, 2019-09-17
206
Köp
Spara som favorit
The surprise hit of the summer and winner of Japan's prestigious Akutagawa Prize, Convenience Store Woman is the incomparable story of Keiko Furukura, a thirty-six-year-old Tokyo resident who has been working at the Hiiromachi "Smile Mart" for the past eighteen years. Keiko has never fit in, neither in her family, nor in school, but in her convenience store, she is able to find peace and purpose with rules clearly delineated clearly by the store's manual, and copying her colleagues' dress, mannerisms, and speech. She plays the part of a "normal person" excellently--more or less. Keiko is very happy, but those close to her pressure her to find a husband and a proper career, prompting her to take desperate action. A sharp-eyed look at contemporary work culture and the pressures we all feel to conform, Convenience Store Woman offers a brilliant depiction of a world hidden from view and a charming and fresh portrait of an unforgettable heroine.
Visa hela texten

Praise for Convenience Store Woman Shortlisted for the Best Translated Book Award Longlisted for the Believer Book Award A Los Angeles Times Bestseller Named a Best Book of the Year by the New Yorker, BuzzFeed, Boston Globe, Literary Hub, Minneapolis Star Tribune, Electric Literature, Library Journal, Shelf Awareness, WBUR, Hudson, Bustle, Chatelaine, and Globe and Mail An Indies Introduce Title An Indie Next Pick An Amazon Best Book of the Month (Literature and Fiction) An Elle Magazine Best Summer Book Pick One of Vogue's Books to Thrill, Entertain, and Sustain You This Summer "In Sayaka Murata's Convenience Store Woman, a small, elegant and deadpan novel, a woman senses that society finds her strange, so she culls herself from the herd before anyone else can do it . . . Casts a fluorescent spell . . . A thrifty and offbeat exploration of what we must each leave behind to participate in the world."--Dwight Garner, New York Times "Alienation gets deliciously perverse treatment in Convenience Store Woman . . . Murata herself spent years as a convenience store employee. And one pleasure of this book is her detailed portrait of how such a place actually works. Yet the book's true brilliance lies in Murata's way of subverting our expectations . . . With bracing good humor . . . Murata celebrate[s] the quiet heroism of women who accept the cost of being themselves."--John Powers, NPR "Fresh Air" "The novel borrows from Gothic romance, in its pairing of the human and the alluringly, dangerously not. It is a love story, in other words, about a misfit and a store . . . Keiko's self-renunciations reveal the book to be a kind of grim post-capitalist reverie: she is an anti-Bartleby, abandoning any shred of identity outside of her work . . . It may make readers anxious, but the book itself is tranquil--dreamy, even--rooting for its employee-store romance from the bottom of its synthetic heart."--Katy Waldman, New Yorker "Keiko, a defiantly oddball 36-year-old woman, has worked in a dead-end job as a convenience store cashier in Tokyo for half her life. She lives alone and has never been in a romantic relationship, or even had sex. And she is perfectly happy with all of it . . . Written in plain-spoken prose, the slim volume focuses on a character who in many ways personifies a demographic panic in Japan."--Motoko Rich, New York Times (profile) "As intoxicating as a sake mojito, Sayaka Murata's Convenience Store Woman is a rare treat: a literary prize-winner that's also a page-turner. Its heroine, Keiko, is an 18-year-old Tokyo misfit who yearns to be like everyone else. Then she lands a job at Hiiromachi Station Smile Mart, one of those enchanting Japanese wonderlands that are equal parts 7-Eleven, McDonald's, and Starbucks. As Keiko finds liberation in the self-effacing rituals of being a good convenience store employee, Murata offers a smart, deliciously perverse look at everything from how mini-marts actually work to the rules, many of them invisible, that ultimately define our identity. And because the book is bracingly brief, you can down it in one afternoon gulp."--John Powers, Vogue "It's the novel's cumulative, idiosyncratic poetry that lingers, attaining a weird, fluorescent kind of beauty all of its own. The world of the store with its dented cans and rice balls and barcodes and scanners, and Keiko's shivery, unashamedly sensual response as a 'convenience store animal' who can 'hear the store's voice telling me what it wanted, how it wanted to be.' The book's title is more than perfect, for this, you soon realize, is a love story. Keiko's love story: the convenience is all hers."--Julie Myerson, Guardian "Murata draws a poignant portrait of what happens when a woman's oppression meets a man's grievance--and one of them has to give . . . It seems all too fitting that Murata's disaffected man, Shiraha, lashes out at a cold world with

Sayaka Murata is the author of many books, including Convenience Store Woman, winner of Japan's most prestigious literary award, the Akutagawa Prize. She used to work part-time in a convenience store, which inspired this novel. Murata has been named a Freeman's "Future of New Writing" author, and her work has appeared in Granta and elsewhere. In 2016, Vogue Japan selected her as a Woman of the Year. Ginny Tapley Takemori has translated works by more than a dozen Japanese writers, including Ryu Murakami. She lives at the foot of a mountain in Eastern Japan.