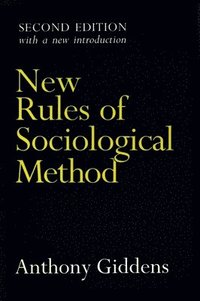 av Anthony Giddens
Häftad Engelska, 1993-10-01
285
Köp
Spara som favorit
This is a new and revised edition of a book which has established itself as a basic text in social theory. The first section of the work provides a concise critical analysis of some leading schools of thought in social philosophy, giving particular attention to phenomenology, ethnomethodology, and Wittgensteinian thought. Giddens concentrates primarily upon the implications of these various perspectives for an account of human action and its intelligibility. An 'action approach' on its own, however, will not do; in human social life, action and structure presuppose one another. The author therefore moves on to provide a series of concepts relevant to understanding the production and reproduction of society. The book concludes with a succinct statement of some 'new rules of sociological method.' Representing the first, and most trenchant, exposition of the principles of structuration theory, this edition also contains a substantial new Introduction in which Giddens replies to some of the more persistent criticisms made of the original version and also addresses some important issues originally discussed only in a cursory way.
Visa hela texten

RThe book had an enormous impact when it was first published, and it has not 'dated' in the least. Indeed, I would contend that it is perhaps the central work in Giddens's corpus and that it is as relevant today as when it was first published. New Rules, with its ambitious title patterned after Durkheim's classic work, was and remains an aggressive contribution to social theory. Well judged adjustments to the text, together with the new and substantial preface, only enhance the book in its new edition.S John Heritage, University of California, Los Angeles