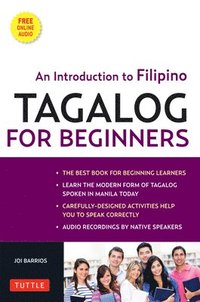 An Introduction to Filipino, the National Language of the Philippines (Online Audio included)

av Joi Barrios
Häftad Engelska, 2011-06-10
242
Köp
Spara som favorit
Finns även som
Visa alla 1 format & utgåvor
Tagalog for Beginners is a straightforward and user-friendly guide to the Tagalog language. It is the book to help you learn Tagalog (Filipino) on your own, quickly and accurately--whether you're traveling to the Philippines for a vacation or a business trip, or you have ties to the sizeable Tagalog-speaking community in the U.S., or you're merely a language lover. From the fascinating history of Philippines' language to how you speak it, join skilled teacher Barrios on a guided introduction--with a practical focus. After journeying through the carefully-paced explanations, conversations, cultural info, and activities in Tagalog for Beginners, learners will be able to use Tagalog (Filipino) in a wide range of everyday situations. From shopping for food to asking directions, from telling time to expressing how you feel, this book gives you the communication skills you need. The online audio recordings help reinforce pronunciation and improve listening comprehension. Helpful suggestions guide heritage learners (those of Filipino descent but born outside the Philippines) on how to use the book most effectively for their needs. Key features include:: Accompanying online audio recordings. Realistic dialogues to bring the language to life. Activities and exercises to help you read, write, speak and understand. Notes on the Tagalog language and history. A specific section guides native (heritage) learners and instructors on how to use the book most effectively for their needs.
Visa hela texten