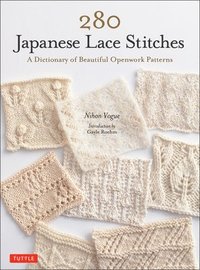 A Dictionary of Beautiful Openwork Patterns

av Nihon Vogue
Häftad Engelska, 2021-04-27
170
Köp
Spara som favorit
Finns även som
Visa alla 1 format & utgåvor
Embrace the Japanese concept of ma (negative space) with these delicate lace stitches. 280 Japanese Lace Stitches is a fun and informative resource for experienced knitters. This book is filled with a wonderful variety of beautiful, openwork stitch patterns, including leaf patterns, diamonds, circles and waves--perennial favorites that can be applied to every type of project, from sweaters to blankets. With full-color photos and expert explanations of the symbols and patterns, knitters can expand their knowledge of this elegant and classic style. 11 basic projects give you a chance to try some of these patterns right away. These gentle introductions include such accessories as: A stripe-textured shawl A short cowl Handwarmers with a circle pattern A versatile winter hat And more! Japanese knitting guru Gayle Roehm introduces the patterns and explains the ins and outs of Japanese knitting. A handy index allows you to search for patterns by number of steps and stitches required, so you can shop from the intricacy side of the menu. A section on how to knit the symbols takes you step-by-step through the stitches used in this book.
Visa hela texten

Nihon Vogue is one of Japan's preeminent publishers of books on handicrafts, with a long history and thousands of titles on knitting, sewing, quilting, embroidery, paper crafts, tole painting and more. Publications in English include works by Hitomi Shida, Keiko Okamoto, Reiko Washizawa, Shizuko Kuroha, Yoko Saito and other internationally recognized designers. Gayle Roehm lived in Japan and studied the language for many years, and has knit from Japanese patterns for most of her knitting career. Gayle teaches at knitting gatherings around the country and occasionally publishes her own designs. In addition to other knitting guides and dictionaries, she is the translator of the Japanese Knitting Stitch Bible and 250 Japanese Knitting Stitches, both by Hitomi Shida.