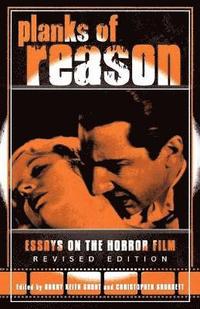 Essays on the Horror Film

av Barry Keith Grant, Christopher Sharrett
Häftad Engelska, 2004-09-01
1129
Köp
Spara som favorit
Finns även som
Visa alla 1 format & utgåvor
The original edition of Planks of Reason was the first academic critical anthology on horror. In retrospect, it appeared as a kind of homage to the "golden age" of the American horror film, as this genre played an increasing role in film culture and American life. The original material represented the history of the genre through the early 1980s and is a crucial part of the book's value, then and now. The first edition helped legitimize academic writing on the horror genre by addressing breakthrough works of such directors as John Carpenter, Tobe Hooper, George Romero, David Cronenberg, and Wes Craven. This revised edition retains the spirit of the original, but also offers new takes on rediscovered classics and recent developments in the genre. In addition to reprinting 17 essays, including Robin Wood's "An Introduction to the American Horror Film," this revised edition features a new essay on the yuppie horror film by editor Barry Keith Grant, as well as an updated analysis of The Texas Chainsaw Massacre by co-editor Christopher Sharrett. Other new essays focus on William Castle's The Tingler and Roger Corman's Pit and the Pendulum, and the recent wave of Japanese horror films. Contains more than 60 photos.
Visa hela texten

Originally published in 1984, this collection of essays remains relevant and informative for those seeking a broad overview of the genre....Grant and Sharrett provide a new introduction (it is twice the length of the previous one) and do an excellent job of summing up that state of horror film at the dawn of the new century....Recommended. * CHOICE * The 1984 edition of academic essays sought to establish the genre as a legitimate subject of study. The second edition takes that achievement as given, and also accounts for films produced over the past two decades, which above all have lost all interest in any social or cultural commentary or critique. Only one essay has been revised; otherwise, some have been dropped and new ones added. Ten of them explore definitions and approaches, the other 12 focus on particular films and filmmakers. * Reference and Research Book News *

Barry Keith Grant is professor of film studies and popular culture at Brock University in Ontario, Canada. He is the author of Voyages of Discovery: The Cinema of Frederick Wiseman, and editor of several books on film. Christopher Sharrett is Professor of Communication at Seton Hall University. His work has appeared in Cineaste, Kino Eye, Journal of Popular Film and Television, Film Quarterly, Persistence of Vision, and numerous anthologies.

Part 1 Acknowledgments Part 2 Introduction Part 3 Part I: Definitions and Approaches Chapter 4 1. The Mummy's Pool Chapter 5 2. Faith and Idolatry in Horror Cinema Chapter 6 3. Conditions of Pleasure in Horror Cinema Chapter 7 4. The Aesthetics of Fright Chapter 8 5. The Witch in Films: Myth and Reality Chapter 9 6. Daughters of Darkness: The Lesbian Vampire on Film Chapter 10 7. Canyons of Nightmare: The Jewish Horror Film Chapter 11 8. An Introduction to the American Horror Film Chapter 12 9. Eros and Syphilization: The Contemporary Horror Film Chapter 13 10. Rich and Strange: The Yuppie Horror Film Part 14 Part 2: Films and Filmmakers Chapter 15 11. Enunciation and the Production of Horror in White Zombie Chapter 16 12. King Kong: Ape and Essence Chapter 17 13. The Comic and the Grotesque in James Whale's Frankenstein Films Chapter 18 14. Film, Society, and Ideas: Nosferatu and Horror of Dracula Chapter 19 15. Ritual, Tension, and Relief: The Terror of The Tingler Chapter 20 16. AIP's Pit and the Pendulum: Poe as Drive-In Gothic Chapter 21 17. The Idea of Apocalypse in The Texas Chainsaw Massacre Chapter 22 18. Archetypal Landscapes and Jaws Chapter 23 19. Biological Alchemy and the Films of David Cronenberg Chapter 24 20. The Enemy Within: The Economy of Violence in The Hills Have Eyes Chapter 25 21. Halloween: Suspense, Aggression, and the Look Chapter 26 22. Demons in the Family: Tracking the Japanese Uncanny Mother Film from A Page of Madness to Ringu Chapter 27 Select Bibliography Chapter 28 Index Chapter 29 About the Editors and Contributors