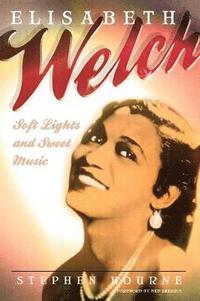 av Stephen Bourne
Häftad Engelska, 2005-07-01
379
Köp
Spara som favorit
From her stage debut in 1922 to her final professional appearance in 1996, Elisabeth Welch was an important figure in the world of popular song. In 1923 she launched the Charleston and throughout the Jazz Age, she was associated with some of the great names of the Harlem Renaissance, including Josephine Baker, Adelaide Hall, Bill 'Bojangles' Robinson, and Ethel Waters. On Broadway she popularized Cole Porter's scandalous song "Love for Sale." After settling in London in 1933, she introduced the classic torch song "Stormy Weather" to British audiences, and that same year she began a career in English musical theatre (Cole Porter's Nymph Errant) that lasted sixty years. In 1930s Britain, Ivor Novello wrote songs for her, Paul Robeson was her leading man in films, and she enjoyed popularity as a cabaret star of London's cafe society. Remaining in her adopted country for the duration of the war (1939-45), Elisabeth entertained the troops and the British public, alongside such theatrical giants as Sir John Gielgud. In the post-war years she reigned supreme in sophisticated revues in London's West End. In 1979 Elisabeth's appearance in Derek Jarman's film version of William Shakespeare's The Tempest (in which she sang "Stormy Weather") won her a whole new legion of fans. At the age of 81, she returned to the Broadway stage and her performance in Jerome Kern Goes to Hollywood earned her a Tony nomination. In Elisabeth Welch: Soft Lights and Sweet Music, author Stephen Bourne celebrates the stage, screen, and radio career of this sophisticated African American actress and singer, who always defied categorization. Spanning almost a century of popular music, she did not fit the definition of jazz, torch, pop or ballad singer but defined her art quite simply as "telling a story in song." Whatever she sang, she demonstrated that she had no peer in the art of interpreting songs by the likes of Cole Porter, Noel Coward, Irving Berlin and Jerome Kern. Includes more than 25 photos.
Visa hela texten

Stephen Bourne, one of Britain's leading authorities on Black history, is a regular contributor to Black Filmmaker magazine and has been interviewed in several documentaries, including Black Divas (1996) and Paul Robeson: Here I Stand (1999). He is the author of Black in the British Frame: The Black Experience in British Film and Television (2001).