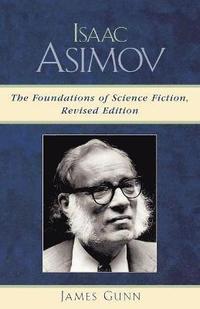 The Foundations of Science Fiction

Gunn succinctly traces Asimov's career, ably summarizing novel plots and identifying concepts that run through Asimov's fiction. * AB Bookman's Weekly * Gunn does an excellent job of illustrating the trends in Asimov's work, and the new material is particularly good. * Science Fiction Chronicle * The first edition of this bio won Gunn a well-deserved Hugo. This new edition brings us up-to-date through Asimov's final works. * Science Fiction Age * James Gunn's study of Asimov's science fiction is undoubtedly the best single introduction and critical guide to this author's SF... * Anatomy of Wonder, 5th Edition * Gunn (English, U. of Kansas, emeritus) answers his own question about what a critic can add to Asimov's autobiographical work by asserting that he has created "criticism in context," a blending of biographical, sociological, publishing and critical considerations. He includes plot summaries and describes the conditions surrounding Asimov's writing and publishing. This paperbound reprint of the 1996 edition (published by Scarecrow Press) is updated from the original 1982 Oxford University Press printing with a consideration of Asimov's work in the last decade of his life and an interview with Asimov. * Reference and Research Book News * ...Gunn is tactful in balancing criticism of some of the late works with praise for what Asimov achieved in his old age...a successful revision of a book that I thought was pretty good... * Science Fiction Studies * Gunn's prose is clear...and the book's primary value lies in his careful synopsis of Asimov's work. In addition, he provides a significant apparatus, including a chronology, an interview with Asimov, and lists of books by and about Asimov. The book will be useful for its factual offerings... * CHOICE * This is more a literary biography than anything else. While James Gunn hits the high points of Asimov's life, they don't get much attention. What does get page space is Asimov's writing. Gunn does not linger over the non-fiction, but he summarizes most of Asimov's important fiction, including several of his short stories and novellas, the Foundation and Robot novels, and The Gods Themselves. If you haven't read much Asimov and think you might like to, this is not the book for you, because it gives away the plots. If you have read a lot of Asimov, this shouldn't be a problem. You may even find, as I did, that you remembered certain books or stories but had forgotten who had written them. For scholars, Gunn includes a chronology of Isaac Asimov's life, a checklist of his works and a short bibliography of works about him. The book has a moderately detailed index. Gunn also includes the transcript of an interview he did with Asimov in 1979, when he was preparing the first edition of Asimov: the Foundations of Science Fiction, which won a Hugo Award. Several times in the interview, Gunn proposes theories about Asimov's works and Asimov says things like 'You're perfectly right' and 'I think perhaps you're right' and 'Well, now, I'm glad you said that, because this is not something I have myself spent time thinking of, but I think you're right now that you present it.' Unless Isaac Asimov was being terribly polite, and that doesn't seem likely, he believed that James Gunn understood him very well and agreed with Gunn's analyses. This can be good or bad. If you like the confrontational, sensational, muckraking sort of biography, any approval by the biographee is suspect. However, if you're looking for accuracy, it's nice. * Green Man Review *

James Gunn is a retired professor of English at the University of Kansas and Director of the Center for the Study of Science Fiction. He has written twelve novels, five collections of short stories, and Alternate Worlds: The Illustrated History of Science Fiction. Gunn is the 24th writer recognized by the Science Fiction & Fantasy Writers of America as a Grand Master.