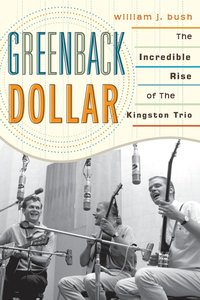 The Incredible Rise of The Kingston Trio

av William J Bush
Häftad Engelska, 2012-12-13
859
Köp
Spara som favorit
Finns även som
Visa alla 1 format & utgåvor
How big an act was the Kingston Trio? Big enough that the their first 19 albums not only reached Billboard's Top 100, but 14 of them entered the top 10, with five albums alone hitting the no. 1 spot! At the height of their popularity, the Kingston Trio was arguably the most popular vocal group in the world, having single-handedly ushered in the folk music boom of the late '50s and early '60s. Their meteoric rise quite literally paved the way for Bob Dylan; Joan Baez; Peter, Paul & Mary; and the many acts that followed in their wake. With the release of their version of "Tom Dooley" in fall 1958, the Kingston Trio changed American popular music forever, inspiring legions of young listeners to pick up guitars and banjoes and join together in hootenannies and sing-alongs. In Greenback Dollar: The Incredible Rise of The Kingston Trio, the first in-depth biography of America's first recording super-group, William J. Bush retraces the band members' personal and professional lives, from their rapid rise to stardom to their early retirement in 1967. Through interviews with Trio members, their families, and associates, Bush paints a detailed portrait of the Trio's formative early years and sudden popular success, their innovations in recording technology, pioneering of the college concert and intensive tour schedule, their impact on and response to the '60s protest movement, the first break-up of the Trio with Dave Guard's departure, and its re-formation with John Stewart. Lovers of folk music and students and scholars of the history of popular music and the music business, the counterculture movement, and the American folk tradition will find in Greenback Dollar a remarkably detailed view of the musical and cultural legacy that resulted in the Kingston Trio receiving a 2011 Lifetime Achievement Award at the 53rd Annual Grammy Awards.
Visa hela texten

Guitar expert and folk music aficionado Bush's in-depth biography of the Kingston Trio, one of America's premier folk acts, may not be all that revelatory to devotees, but to those only familiar with hits like 'Tom Dooley', the group's contributions and resounding legacy may come as a surprise. Drawing from multiple interviews with band members, friends, and family, Bush chronicles the group's quick rise from early performances at cafes and bars to multiplatinum success in the late '50s and '60s. Though hardly members of the Beat Generation, the Kingston Trio cut their teeth in a number of jazz clubs, rubbing elbows with giants like Thelonious Monk, Bill Evans, and Dave Brubeck. This exposure helped lay the groundwork for the success sparked by their hit 'Tom Dooley' and opened the door for a litany of other folk performers. Despite a lily-white appearance, the group's live shows were often laced with caustic commentary that lent a vaudevillian aspect to their performances. Readers hoping for a lurid tell-all will find the book to be exceedingly tame; still, this is a warm and fitting appreciation of an act that's often been overshadowed by those who followed in their footsteps. * Publishers Weekly * My favorite among this crop of recent material is the long awaited biography of my all-time favorite musical group. William J.Bush's Greenback Dollar: The incredible rise of the Kingston Trio tells the story of the act that not only launched America's folk music boom of the 1950's and 60's, but in its way helped pave the way for the even more phenomenal success in this country of The Beatles. . . .Greenback Dollar is a book that will appeal not only to fans of this group in particular but to students of American pop music in general. This is one I simply cannot recommend highly enough. * The Capital * After the huge success of Elvis Presley there was a moment when it looked as if rock 'n' roll might, indeed, be nothing more than a fad. Its successor in the world of popular music would be folk music, and its undisputed leader was the Kingston Trio. In Greenback Dollar: The Incredible Rise of the Kingston Trio William J. Bush details the history of this landscape altering band. In it, Bush details the biographies of, first, the original three members of the band - Nick Reynolds, Bob Shane, and Dave Guard - and their meteoric rise to fame from 1958 through 1961. He then tells of the falling out and eventual replacement of Guard with John Stewart and the continued artistic and commercial success of the band through the sixties. Along the way, Bush (a friend of all the members of these two incarnations of the band) describes the important places and events that led to the massive popularity that followed the Trio. So rock music never did fade away, but the influence of folk, thanks in large part to the Kingston Trio, became an integral part of popular music for decades to come. * New Books Network * Finally someone has written the definitive story of the late '50s/early '60s group that changed American popular music forever. It's fascinating and informative, and it will keep you up way past your bedtime. * Inland Northwest Bluegrass Music Association * This is a thrilling biography of one of America's greatest folk singer groups. A book that will be enjoyed by the baby boomer generation and others who enjoy folk music singing groups. * Lone Star Newsletter * Greenback Dollar is a major contribution to the history of the folk revival. This volume is especially important considering the central, indeed formative, place of the Kingston Trio within the revival. Bush's biography is deeply informed by his background as a music journalist specializing in acoustic music. He digs into the business and professional life of the group, drawing on primary resources by relying largely on interviews with the surviving members of the Trio and with those who knew them. The greatest strength of this book, by far, is the ready access the author had to hi

William J. Bush is an advertising writer, music journalist, photographer and perennial student of Martin guitars, Buddy Holly and The Kingston Trio. His articles have been featured in Guitar Player, Frets, Acoustic Guitar, Flatpicking Guitar, The Sounding Board (Martin Guitar Company), Pennsylvania Heritage, The Guitar Player Book (Grove Press) and Artists Of American Folk Music (Quill Books). He has also written for EMI/Capitol Records, Folk Era Records, Bear Family Records and Shout! Factory (Sony). In 2006, he appeared in the PBS documentary, The Kingston Trio: Wherever We May Go. His photography of rock legend Dion DiMucci has been featured in New York Magazine and the cover of Dion's 2006 Grammy-nominated blues CD, Bronx In Blue.