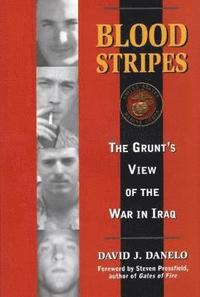 The Grunt's View of the War in Iraq

av David J Danelo
Inbunden Engelska, 2006-06-01
214
Köp
Spara som favorit
Finns även som
Visa alla 1 format & utgåvor
A sometimes harrowing, often humorous, and occasionally tragic look at the Marine Corps from the inside out in its struggle with the insurgency in Iraq. Drawing from personal experience in the confusing, deadly conflict currently being fought in the streets and back alleys of Iraqi towns and villages, Danelo focuses on the young Marine leaders--corporals and sergeants--whose job it is to take even younger Marines into battle, close with and destroy an elusive enemy, and bring their boys back home again. Sadly, there are losses, but true to the Marine Corps spirit, they soldier on, earning their blood stripes the only way they know how--the hard way.
Visa hela texten

"It's a must-read -- a real story of the War in Iraq - from those who know it well." -- TogetherWeServed.com. "...a superb cover-to-cover read, allowing any combat bookworm to mix and mingle with the complex problems of confronting hardened and deadly insurgency fighters." -- Leatherneck, Magazine of the Marines, January 2007.

David J. Danelo is a Marine Corps veteran of the Iraq War. His work has appeared in the New York Post, Los Angeles Times, Marine Corps Gazette, and Parade magazine. He also has appeared on Fox News and other national networks. A graduate of the U.S. Naval Academy, he is also the author of Blood Stripes: The Grunts View of the War in Iraq.