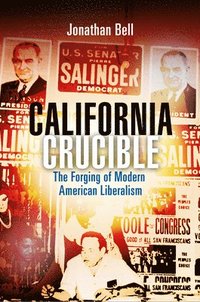 The Forging of Modern American Liberalism

av Jonathan Bell
Inbunden Engelska, 2012-02-29
690
Bevaka
Spara som favorit
Tillfälligt slut – klicka "Bevaka" för att få ett mejl så fort boken går att köpa igen.
Finns även som
Visa alla 1 format & utgåvor
In the three decades following World War II, the Golden State was not only the fastest-growing state in the Union but also the site of significant political change. From the late 1940s through the mid-1970s, a generation of liberal activists transformed the political landscape of California, ending Republican dominance of state politics and eventually setting the tone for the Democratic Party nationwide. In California Crucible, Jonathan Bell chronicles this dramatic story of postwar liberalism-from early grassroots organizing and the election of Pat Brown as governor in 1958 to the civil rights campaigns of the 1960s and the campaigns against the New Right in the 1970s. As Bell argues, the emergent "California liberalism" was a distinctly post-New Deal phenomenon that drew on the ambitious ideals of the New Deal but adapted them to a diverse population. The result was a broad coalition that sought to extend social democracy to marginalized groups-such as gay rights and civil rights organizations-that had not been well served by the Democratic Party in earlier decades. In building this coalition, liberal activists forged an ideology capable of bringing Latino farm workers, African American civil rights activists, and wealthy suburban homemakers into a shared political project. By exploring California Democrats' largely successful attempts to link economic rights to civil rights and serve the needs of diverse groups, Bell challenges common assumptions about the rise of the New Right and the decline of American liberalism in the postwar era. As Bell shows, by the end of the 1970s California had become the spiritual home of the liberal wing of the Democratic Party as much as that of the Reagan Revolution.
Visa hela texten

Jonathan Bell's California Crucible is the rare book that makes one wonder why no one has written it before. Focusing on the nexus of grassroots activists, political ideology, and party politics, this is exactly the kind of work that historians of American politics should be doing. Bell gets the story beyond Washington and into the rest of America, and he charts the organic growth of today's so-called identity politics out of Great Society liberalism, refuting hackneyed notions of their discontinuity. If a new history of twentieth-century American liberalism is on the way, then we will look back on California Crucible as one of its signal texts. * Doug Rossinow, author of <i>The Politics of Authenticity: Liberalism, Christianity, and the New Left in America</i> * Deeply researched and forcefully argued, California Crucible reveals how a grassroots Democratic political project in California began to emerge in the 1940s and came to control party politics by the mid-1970s. Bell's Democrats are a distinctively post-New Deal phenomenon, and by showing their resilience and influence, the so-called rise of the Right, in Bell's rendering, is hardly the undisputed vanquishing of the Left that historians of American conservatism claim it to be. * Mark Brilliant, University of California, Berkeley *

Jonathan Bell is Senior Lecturer and Chair of the History Department at the University of Reading.