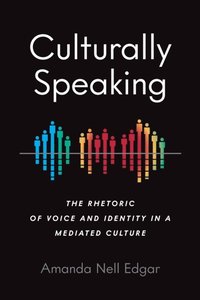 The Rhetoric of Voice and Identity in a Mediated Culture

av Edgar Amanda Nell Edgar
E-bok (EPUB - DRM), Engelska, 2019-09-13
538
Ladda ned
Spara som favorit
Laddas ned direkt
Läs i vår app för iPhone och iPad
Finns även som
Visa alla 2 format & utgåvor
Winner, 2020 Outstanding Book Award, Critical/Cultural Studies Division of the National Communication AssociationRecent pieces by NPR, the BBC, and Forbes have called attention to the power of voice-positing that &quoteyour voice is the secret to getting hired&quote and that &quotevoice can accelerate or hold back a career.&quote While it has become clearer that such things as pitch and intonation can be tied to assumptions about one's gender, race/ethnicity, and class, studying voice as a socially constructed artifact carries with it unique challenges. In response, Culturally Speaking: The Rhetoric of Voice and Identity in a Mediated Culture presents an innovative approach to studying the spoken voice in media, showing how racial and gendered oppression bubble beneath the surface of American culture's most recognized speaking voices, spreading invisible messages about which kinds of vocal identities are privileged and which kinds should be silenced. Through her analysis of prominent voices in American culture-including Morgan Freeman, Tina Fey, Barack Obama, Adele, Dave Chappelle, Richard Pryor, and George Lopez-Amanda Nell Edgar argues that voices carry a residue of the particular cultural environments in which they are formed, and that these environments can be traced and analyzed to add a sonic dimension to our understanding of race and gender as rhetorically situated identities-pushing back against the often-unnoticed systems of sound-based discrimination.
Visa hela texten