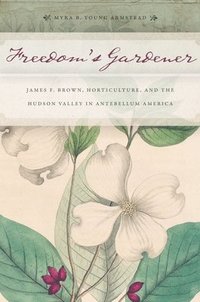 av Myra B Young Armstead
Inbunden Engelska, 2012-02-01
891
Köp
Spara som favorit
Finns även som
Visa alla 1 format & utgåvor
A fascinating study of freedom and slavery, told through the life of an escaped slave who built a life in the Hudson Valley In 1793 James F. Brown was born a slave, and in 1868 he died a free man. At age 34 he ran away from his native Maryland to pass the remainder of his life as a gardener to a wealthy family in the Hudson Valley. Two years after his escape and manumission, he began a diary which he kept until his death. In Freedom's Gardener, Myra B. Young Armstead uses the apparently small and domestic details of Brown's diaries to construct a bigger story about the transition from slavery to freedom. In this first detailed historical study of Brown's diaries, Armstead utilizes Brown's life to illuminate the concept of freedom as it developed in the United States in the early national and antebellum years. That Brown, an African American and former slave, serves as such a case study underscores the potential of American citizenship during his lifetime.
Visa hela texten

With this meticulously sourced and carefully reasoned portrait, Armstead reclaims an outstanding American who helped freedom grow. * Booklist * Armstead explores the meaning of northern African American identity through her deft decoding of a ten-volume diary left by James F. Brown...Recommended for historians of antebellum America or the social aspects of horticulture and for those interested in historical diaries. Incipient researchers will learn the differences among term, life, and wage slaves and much else * Library Journal * Overall, this is an informative study of antebellum New York State. -- R. Douglas Hurt * New York History * An enlightening examination of a period of American history that seems to have slipped from public scrutiny...Armstead's review of the status of American horticulture during the first half of the nineteenth century makes this volume intriguing reading for gardeners. -- Marilyn K. Alaimo * Chicago Botanic Garden * Myra Young Armstead brings to life James Brown, a self-possessed African American citizen of the pre-Civil War United States, and gives us anew understanding of the meaning of freedom in antebellum America. As a master gardener in rural upstate New York, James Brown charted a life of complex alliances across racial lines and advocacy on behalf of fellow African Americans. Armstead's wonderful work of recovery illuminates a path to freedom in the rural North that we have known little about. * Leslie M. Harris, Emory University * This is far more than a book about a gardener though it is a fascinating story about nineteenth-century American horticulture. Freedom's Gardener tells us about the opportunities and limits that framed the lives of African Americans in places like New York's Hudson Valley. And a good read to boot. * James Grossman, University of Chicago * Freedom's Gardener is an excellent example of how historians can transform one person's life into a story that illustrates the larger picture for both scholars and a broader audience. * Journal of American History * Freedom's Gardener is beautifully researched, bursting with detail. * The New York Times *

Myra B. Young Armstead is Professor of History at Bard College. Her books include "Lord, Please Don't Take Me in August": African Americans in Newport and Saratoga Springs, 1870-1930 and Mighty Change, Tall Within: Black Identity in the Hudson Valley.

Acknowledgments Introduction Part I. LIFE AS A SLAVE 1.What Can a Man Do? 2.Into the Promised Land Part II. FREE MAN AND FREE LABORER 3.A Horticultural Community 4. A Gardening Career 5. Cultural Meanings of Gardening 6. Escaping Wage Slavery Part III. FREE MAN AND CITIZEN 7. A Whiggish Sensibility 8. James F. Brown, Voting Rights Politics, and Antislavery Activism 9. The Informal Politics of Association Conclusion Notes About the Author