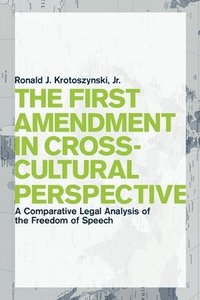 The First Amendment in Cross-Cultural Perspective

A Comparative Legal Analysis of the Freedom of Speech

av Ronald J Krotoszynski Jr
Häftad Engelska, 2009-03-01
280
Köp
Spara som favorit
Finns även som
Visa alla 1 format & utgåvor
The First Amendment-and its guarantee of free speech for all Americans-has been at the center of scholarly and public debate since the birth of the Constitution, and the fervor in which intellectuals, politicians, and ordinary citizens approach the topic shows no sign of abating as the legal boundaries and definitions of free speech are continually evolving and facing new challenges. Such discussions have generally remained within the boundaries of the U.S. Constitution and its American context, but consideration of free speech in other industrial democracies can offer valuable insights into the relationship between free speech and democracy on a larger and more global scale, thereby shedding new light on some unexamined (and untested) assumptions that underlie U.S. free speech doctrine. Ronald J. Krotoszynski, Jr., compares the First Amendment with free speech law in Japan, Canada, Germany, and the United Kingdom-countries that are all considered modern democracies but have radically different understandings of what constitutes free speech. Challenging the popular-and largely American-assertion that free speech is inherently necessary for democracy to thrive, Krotoszynski contends that it is very difficult to speak of free speech in universalist terms when the concept is examined from a framework of comparative law that takes cultural difference into full account.
Visa hela texten

"Krotoszynskis conclusions are revealing and forcefully presented. This is especially so when they are based on the authors sophisticated and copiously documented comparison of the U.S. with four advanced legal systems committed to participatory politics. The book undoubtedly challenges many of us who smugly accept American & exceptionalism in freedom of speech and the press. . . . Krotoszynski helps us appreciate the value of comparative free speech with a new, penetrating perspective." * Law and Politics Book Review * "Suggests that First Amendment scholars might find it useful to consider how other nations, committed to democratic government, have sought to resolve the constant tension between protecting speech while also securing equality." * New York Law Journal * "An important contribution in support of constitutional exceptionalism. . . . The great gift of Krotoszynskis book is to turn our attention to a knottier subject on which there is far less consensus." * Michigan Law Review * "There are very few scholars who are willing to read as widely in the law of the world as Krotoszynski, and very few who are capable of forming such confident and intelligent judgments." -- James Whitman,Yale Law School "The uniquely American sense of freedom that makes the First Amendment so beloved and so respected in its homeland is precisely what makes it a difficult model for constitutional protection of expression in other political systems. In this survey of free speech policies in Canada, Germany, Japan, and the United Kingdom, Krotosyznski introduces American students and scholars of constitutional law to a diverse range of culturally contingent approaches to protecting the freedom of expression in other industrialized countries. . . . As Krotosyznskis fascinating project demonstrates, comparative constitutional analysis challenges us as Americans to examine critically the cultural assumptions underlying our legal system." -- Jim Chen,University of Minnesota Law School

Ronald J. Krotoszynski, Jr., is the John S. Stone Chair, Director of Faculty Research, and Professor of Law at the University of Alabama School of Law. He is co-author of Administrative Law.