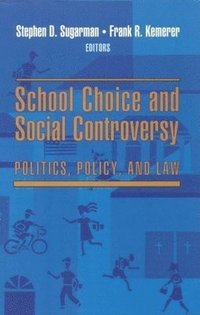 av Stephen D Sugarman, Frank R Kemerer
Häftad Engelska, 1999-12-01
264
Köp
Spara som favorit
In this important new volume, distinguished legal and public policy scholars address issues that are critical to the successful drafting and implementation of school choice programs, yet are usually overlooked in the choice debate. They explore whether school choice is a threat or an opportunity to the many children who are largely deprived of choice today and they offer a variety of perspectives, with some authors enthusiastic, others more skeptical. The book begins with a discussion of the types and extent of school choice, what is known about its consequences, and how politics has influenced its development. It then focuses on three important public policy issues: how school choice can revolutionize the way schools are financed, what policy interventions are necessary to increase the supply of choice schools, and how choice programs can be held accountable to parents and the state without undermining institutional autonomy. The book addresses legal issues, including whether public and private choice schools will be required to observe student and teacher rights generally recognized in traditional public schools, how the religion and speech clauses of the First Amendment may affect the participation of religious schools in school choice programs, whether school choice will enhance or aggravate opportunities for racial justice, what the implications of school choice are for teacher unions and collective bargaining, and whether children with disabilities will be accommodated in school choice programs under federal disability law. Throughout the book, the authors offer recommendations for public policy development. The contributors are Jeffrey Henig, Robert Bulman and David L. Kirp, Paul T. Hill, Robert M. O'Neil, Jesse H. Choper, Betsy Levin, William G. Buss, and Laura F. Rothstein. Stephen D. Sugarman is Agnes Roddy Robb Professor of Law at the University of California, Berkeley. Frank R. Kemerer is Regents Professor and director of the Center for the Study of Education Reform at the University of North Texas.
Visa hela texten

"...charter school operators--and their lawyers--ought to have copies, and study them carefully. " -Martin Morse Wooster, American Enterprise, American Enterprise |"...a major contribution to the discussion of school choice." -Ralph D. Mawdsley, J.D., Ph.D., Ralph D. Mawdsley, J.D., Ph.D. |"...among the most thoughtful presentations of the policy issues represented by school choice and their consequences. Both sides in the emerging debate will find ammunition to support their position as well as analysis to undermine it. The authors are leading scholars, and the conclusions are often surprising. " -Henry M. Levin, Teacher's College, Columbia U., Teacher's College, Columbia U. |"This important book on school choice moves beyond the pro and anti rants to discuss issues of law and public policy that any school choice plan must address. It highlights such matters as equity, collective bargaining, availability of schools, accountability, and finance; it analyzes evidence and history; and it does so with reasoned prose and analytic insight. A must read for anyone designing a school choice plan--or opposing it." -Carol H. Weiss, Harvard University, Harvard University |"...to be commended for recruiting a set of uniformly high quality scholars who have in turn contributed first-rate chapters. " -Michael Giles, Department of Political Science, Emory University, Department of Political Science, Emory University |"A well-written treatise.... 'School Choice and Social Controversy' is an excellent volume. The writing is clear and lucid.... Students in educational history, school finance and administration, as well as the general reader will find this book of inestimable value." -Joseph T. Durham, President Emeritus, Community College of Baltimore, The Negro Educational Review, 10/1/2001 |"The media has tended to draw universal conclusions about school choice from proposals that happen to cross the editor's desk. If this intellectual lapse has been forgivable, it is no longer. Sugarman, Kemerer, and company here display the raw material necessary to serious policy judgment. Systems of choice are legion; their differences matter. The serious critic now will look before leaping to conclusions and he will look here." -John E. Coons, University of California, Berkeley |"This book achieves its goal of dispassionately analyzing the legal and policy aspects of school choice.... the editors strike a helpful balance between scope of coverage and topical depth.... 'School Choice and Social Controversy' remains a leading synthesis of law and policy on the school choice issue." -Michael Heise, University of Chicago Law Review, 7/1/2001