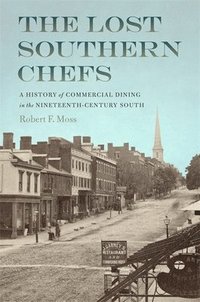 A History of Commercial Dining in the Nineteenth-Century South

av Robert F Moss
Häftad Engelska, 2022-02-15
325
Köp
Spara som favorit
Finns även som
Visa alla 1 format & utgåvor
In recent years, food writers and historians have begun to retell the story of southern food. Heirloom ingredients and traditional recipes have been rediscovered, the foundational role that African Americans played in the evolution of southern cuisine is coming to be recognized, and writers are finally clearing away the cobwebs of romantic myth that have long distorted the picture. The story of southern dining, however, remains incomplete. The Lost Southern Chefs begins to fill that niche by charting the evolution of commercial dining in the nineteenth-century South. Robert F. Moss punctures long-accepted notions that dining outside the home was universally poor, arguing that what we would today call "fine dining" flourished throughout the region as its towns and cities grew. Moss describes the economic forces and technological advances that revolutionized public dining, reshaped commercial pantries, and gave southerners who loved to eat a wealth of restaurants, hotel dining rooms, oyster houses, confectionery stores, and saloons. Most important, Moss tells the forgotten stories of the people who drove this culinary revolution. These men and women fully embodied the title "chef," as they were the chiefs of their kitchens, directing large staffs, staging elaborate events for hundreds of guests, and establishing supply chains for the very best ingredients from across the expanding nation. Many were African Americans or recent immigrants from Europe, and they achieved culinary success despite great barriers and social challenges. These chefs and entrepreneurs became embroiled in the pitched political battles of Reconstruction and Jim Crow, and then their names were all but erased from history.
Visa hela texten

The Lost Southern Chefs is a gem for those, like me, who love hidden histories. Robert Moss has a real gift for finding, reviving, and telling the stories of the famous, notable, and obscure people who made southern food so beloved. Moss wonderfully sheds a new and important light on one of America's most notable regional cuisines. Has any art been more neglected by historians than the culinary? Here Robert F. Moss honors the forgotten men and women, black and white, who made hospitality a profession and gave southern cuisine a glorious international reputation.

Robert F. Moss is a writer and independent scholar based in Charleston, South Carolina. He is the author of Southern Spirits: Four Hundred Years of Drinking in the American South and Barbecue: The History of an American Institution. He is currently the contributing barbecue editor for Southern Living and the southern food correspondent for Serious Eats.