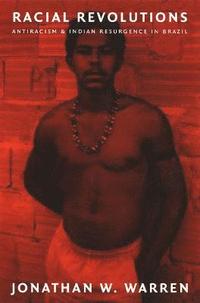 Antiracism and Indian Resurgence in Brazil

av Jonathan W Warren
Inbunden Engelska, 2001-09-01
1373
Bevaka
Spara som favorit
Tillfälligt slut – klicka "Bevaka" för att få ett mejl så fort boken går att köpa igen.
Finns även som
Visa alla 2 format & utgåvor
Since the 1970s there has been a dramatic rise in the Indian population in Brazil as increasing numbers of pardos (individuals of mixed African, European, and indigenous descent) have chosen to identify themselves as Indians. In Racial Revolutions-the first book-length study of racial formation in Brazil that centers on Indianness-Jonathan W. Warren draws on extensive fieldwork and numerous interviews to illuminate the discursive and material forces responsible for this resurgence in the population. The growing number of pardos who claim Indian identity represents a radical shift in the direction of Brazilian racial formation. For centuries, the predominant trend had been for Indians to shed tribal identities in favor of non-Indian ones. Warren argues that many factors-including the reduction of state-sponsored anti-Indian violence, intervention from the Catholic church, and shifts in anthropological thinking about ethnicity-have prompted a reversal of racial aspirations and reimaginings of Indianness. Challenging the current emphasis on blackness in Brazilian antiracist scholarship and activism, Warren demonstrates that Indians in Brazil recognize and oppose racism far more than any other ethnic group. Racial Revolutions fills a number of voids in Latin American scholarship on the politics of race, cultural geography, ethnography, social movements, nation building, and state violence. Designated a John Hope Franklin Center book by the John Hope Franklin Seminar Group on Race, Religion, and Globalization.
Visa hela texten

"Racial Revolutions is a deeply thoughtful and highly accessible analysis of contemporary racism. Jonathan Warren combines a highly developed research design, a powerful synthesis of crucial modern and postmodern theoretical frameworks, and a strong commitment to racial justice. This book will have important influence, not only on anthropology and studies of race, but on our understandings of indigenous cultures and movements, on our view of Brazil, and on our understanding of ourselves."-Howard Winant, author of The World is a Ghetto: Race and Democracy since World War II "This is an original work that will be welcomed by all those interested in Brazil and in the Indian question in Latin America. Very well written, engaging, and successful in conveying the world and the voices of the actors, Racial Revolutions is indeed a pleasurable read."-Leon Zamosc, University of California, San Diego "Jonathan W. Warren moves beyond an overly narrow, black and white conceptualization of Brazil's racial politics by broadening the scope of scholarly attention to consider the contemporary struggles of Brazil's self-identified Indians. . . . Racial Revolutions illuminates an understudied domain of contemporary Brazilian racial politics, making an important contribution to the literature on race in Brazil and to the more general comparative literature in this field." -- Mara Loveman * Contemporary Sociology * "Jonathan Warren has written a provocative, no-holds-barred appeal to incorporate Brazil's eastern Indians into scholarship about race and antiracist activism. . . . Racial Revolutions begins to fill a Brazilian void in the growing U.S.-produced anthropological literature about mixed-race peoples and their indigenous roots throughout Latin America. . . . A stimulating book, well suited for undergraduate teaching about race and ethnicity in Latin America." -- Jan Hoffman French * Hispanic American Historical Review * Warren details a nuanced process of an Indian resurgence and antiracism. This book is a must for those studying Brazilian racial issues. Furthermore, scholars of indigenous communities, social movements, and those interested in ethnogenesis and racial formation in general would find this book of interest." -- Stanley R. Bailey * American Journal of Sociology *