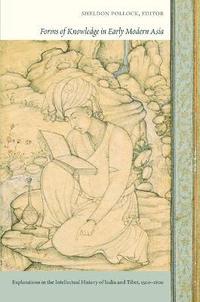 Explorations in the Intellectual History of India and Tibet, 1500-1800

av Sheldon Pollock
Inbunden Engelska, 2011-03-14
1359
Bevaka
Spara som favorit
Tillfälligt slut – klicka "Bevaka" för att få ett mejl så fort boken går att köpa igen.
Finns även som
Visa alla 2 format & utgåvor
In the past two decades, scholars have transformed our understanding of the interactions between India and the West since the consolidation of British power on the subcontinent around 1800. While acknowledging the merits of this scholarship, Sheldon Pollock argues that knowing how colonialism changed South Asian cultures, particularly how Western modes of thought became dominant, requires knowing what was there to be changed. Yet little is known about the history of knowledge and imagination in late precolonial South Asia, about what systematic forms of thought existed, how they worked, or who produced them. This pioneering collection of essays helps to rectify this situation by addressing the ways thinkers in India and Tibet responded to a rapidly changing world in the three centuries prior to 1800. Contributors examine new forms of communication and conceptions of power that developed across the subcontinent; changing modes of literary consciousness, practices, and institutions in north India; unprecedented engagements in comparative religion, autobiography, and ethnography in the Indo-Persian sphere; and new directions in disciplinarity, medicine, and geography in Tibet. Taken together, the essays in Forms of Knowledge in Early Modern Asia inaugurate the exploration of a particularly complex intellectual terrain, while gesturing toward distinctive forms of non-Western modernity.Contributors. Muzaffar Alam, Imre Bangha, Aditya Behl, Allison Busch, Sumit Guha, Janet Gyatso, Matthew T. Kapstein, Francoise Mallison, Sheldon Pollock, Velcheru Narayana Rao, Kurtis R. Schaeffer, Sunil Sharma, David Shulman, Sanjay Subrahmanyam, Mohamad Tavakoli-Targhi
Visa hela texten

"Cultural and postcolonial studies scholars conceptualize colonial power as overwhelmingly domineering, paying little attention to the complex changes underway in South Asia before British imperial domination. This creates a substantive gap, which Forms of Knowledge in Early Modern Asia begins to fill. This collection of excellent essays is a major addition to the literature on early modern Asia."-David Ludden, author of Early Capitalism and Local History in South India "Deserving of our attention in their own right as splendid scholarly contributions to the growing field of early-modern studies in South Asia and Tibet, the essays in this collection have the additional merit of addressing, often explicitly, the fallacious but widespread tendency on the part of many to pronounce on colonial knowledge or modernity in the subcontinent without much engagement with what preceded them. Students of both precolonial and colonial South Asia will benefit from this book."-Dipesh Chakrabarty, author of Provincializing Europe: Postcolonial Thought and Historical Difference "Forms of Knowledge in Early Modern Asia succeeds in more than just skimming the surface of South Asian scholarship, and as a new entry in a relatively sparse field, opens several important questions about how we, as scholars, recognize and define systems of knowledge in early modern history." -- Emily Rook-Koepsel * Journal of Early Modern History * "Yet the synergy created by bringing these excellent essays together in a single volume opens up new frameworks for the analysis of intellectual history. Forms of Knowledge in Early Modern Asia is an exciting and path-breaking volume of essays that will surely entice others to undertake research along similar lines." -- Cynthia Talbot * Asian Studies Reader * "This compilation of essays is a valuable contribution to a nascent scholarly field that is beginning to chip away at too-long-held assumptions about the degree and kind of modernity that developed in South Asia." -- Erin E. O'Donnell * History: Reviews of New Books * "Given the range of geographic and linguistic areas that this volume covers, scholars might be tempted to read only those essays pertaining to their fields of specialization. The advantage of this book's breadth, however, is that it enables the identification of wider trends that cross particular language zones. On the other hand, the overlapping themes that emerge in the course of such a study are balanced by the high level of detail in the individual studies." -- Supriya Gandhi * Sixteenth Century Journal * "This innovative volume contains thirteen essays on languages, knowledge traditions, and literary cultures in South Asia and Tibet in the three centuries before 1800.... The essays raise many interesting questions and bring to light fascinating material, and the book is highly recommended." -- Knut A. Jacobsen * Journal of World History * "The text is versatile for both specialist and student, for it introduces hundreds of little-known works that enrich areas where previous scholarship had all-too-often focused exclusively on religious literatures.... The volume ultimately makes the reader hungry for more, for more on South India and for more on the traffic in and out of Southeast Asia. The prospect of what is left to be discovered has never been more tantalizing." -- Tony K. Stewart * Journal of the Economic and Social History of the Orient *

Sheldon Pollock is the William B. Ransford Professor of Sanskrit and Indian Studies in the Department of Middle Eastern, South Asian, and African Studies at Columbia University. He is the author of The Language of the Gods in the World of Men: Sanskrit, Culture, and Power in Premodern India; the editor of a number of books, including Literary Cultures in History: Reconstructions from South Asia; and a co-editor of Cosmopolitanism, also published by Duke University Press.

Acknowledgments ix Introduction / Sheldon Pollock 1 Part I. Communication, Knowledge, and Power 1. The Languages of Science in Early Modern India / Sheldon Pollock 19 2. Bad Language and Good Language: Lexical Awareness in the Cultural Politics of Peninsular India, ca. 1300-1800 / Sumit Guha 49 3. A New Imperial Idiom in the Sixteenth Century: Krishnadevaraya and His Political Theory of Vijayanagara / Velcheru Narayana Rao, David Shulman, and Sanjay Subrahmanyam 69 Part II. Literary Consciousness, Practices, and Institutions in North India 4. The Anxiety of Innovation: The Practice of Literary Science in the Hindi Riti Tradition / Allison Busch 115 5. Writing Devotion: The Dynamics of Textual Transmission n the Kavitavali of Tulsidas / Imre Bangha 140 6. The Teaching of Braj, Gujarati, and Bardi Poetry at the Court of Kutch: The Bhuj Brajbhasa Pathsala (1749-1948) / Francoise Mallison 171 Part III. Inside the World of Indo-Persian Thought 7. The Making of a Munshi / Muzaffar Alam and Sanjay Subrahmanyam 185 8. Pages from the Book of Religions: Encountering Difference in Mughal India / Aditya Behl 210 9. "If There Is a Paradise on Earth, It Is Here": Urban Ethnography in Indo-Persian Poetic and Historical Texts / Sunil Sharma 240 10. Early Persianate Modernity / Mohamad Tavakoli-Targhi 257 Part IV. Early Modernities of Tibetan Knowledge 11. New Scholarship in Tibet, 1650-1700 / Kurtis R. Schaeffer 291 12. Experience, Empiricism, and the Fortunes of Authority: Tibetan Medicine and Buddhism on the Eve of Modernity / Janet Gyatso 311 13. Just Where on Jambudvipa Are We? New Geographical Knowledge and Old Cosmological Schemes in Eighteenth-century Tibet / Matthew T. Kapstein 336 Contributors 365 Index 369