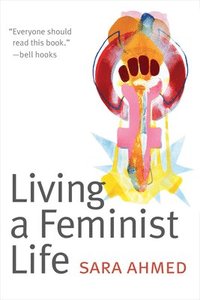 av Sara Ahmed
(1 röst)  |  Läs 1 recension
Häftad Engelska, 2017-02-03
306
Köp
Spara som favorit
Finns även som
Visa alla 2 format & utgåvor
In Living a Feminist Life Sara Ahmed shows how feminist theory is generated from everyday life and the ordinary experiences of being a feminist at home and at work. Building on legacies of feminist of color scholarship in particular, Ahmed offers a poetic and personal meditation on how feminists become estranged from worlds they critique-often by naming and calling attention to problems-and how feminists learn about worlds from their efforts to transform them. Ahmed also provides her most sustained commentary on the figure of the feminist killjoy introduced in her earlier work while showing how feminists create inventive solutions-such as forming support systems-to survive the shattering experiences of facing the walls of racism and sexism. The killjoy survival kit and killjoy manifesto, with which the book concludes, supply practical tools for how to live a feminist life, thereby strengthening the ties between the inventive creation of feminist theory and living a life that sustains it.
Visa hela texten

"Fans of bell hooks and Audre Lorde will find Ahmed's frequent homages and references familiar and assuring in a work that goes far beyond Betty Friedan's The Feminine Mystique, capturing the intersection so critical in modern feminism." -- Abby Hargreaves * Library Journal * "Living a Feminist Life is a work of embodied political theory that defies the conventions of feminist memoir and self-help alike. . . . Living a Feminist Life makes visible the continuous work of feminism, whether it takes place on the streets, in the home, or in the office. Playful yet methodical, the book tries to construct a living feminism that is neither essentialist nor universalist." -- Melissa Gira Grant * Bookforum * "Living a Feminist Life is perhaps the most accessible and important of Ahmed's works to date. . . . [A] quite dazzlingly lively, angry and urgent call to arms. . . In short, everybody should read Ahmed's book precisely because not everybody will." -- Emma Rees * Times Higher Education * "Beautifully written and persuasively argued, Living a Feminist Life is not just an instant classic, but an essential read for inter sectional feminists." -- Ann A. Hamilton * Bitch * "This book is about a wriggling out, a speaking out. And it teaches me to write, to think, like this - word twists word, and body to thought. Because for Ahmed, words make worlds and her book - the first after she left academia in feminist revolt - is full of bluesy world-play." -- Caren Beilin * Full Stop * "Living a Feminist Life is the perfect introduction to Ahmed's academic work, if a general reader is unfamiliar with her. . . . For me, her lack of despair is the book's strongest point. Ahmed's work is as cutting and critical as it is joyful. There is a distinct hope and optimism for the future of diversity work - but still a demand for better." -- Evelyn Deshane * The F-Word * "Undeniably, Ahmed's book is a highly crafted work, both scholarly and lyrically, that builds upon itself and delivers concrete, adaptable conclusions; it is a gorgeous argument, crackling with kind wit and an invitation to the community of feminist killjoys." -- Theodosia Henney * Lambda Literary Review * "Ahmed gifts us words that we may have difficulty finding for ourselves.... [R]eading her book provides a tentative vision for a feminist ethics for radical politics that is applicable far beyond what is traditionally considered the domain of feminism." -- Mahvish Ahmad * The New Inquiry * "Anyone at odds with this world-and we all ought to be-owes it to themselves, and to the goal of a better tomorrow, to read this book." -- Mariam Rahmani * Los Angeles Review of Books * "Living a Feminist Life offers something halfway between the immediacy and punch of the blog and the multi-layered considerations of a scholarly essay; the result is one of the most politically engaged, complex and personal books on gender politics we have seen in a while." -- Bidisha * TLS * "Especially compelling is Ahmed's insistence that living as a feminist is not a sudden, euphoric escape from patriarchy and other structures of domination. Instead, it's a lifelong project of chipping away at regimes that continue to exert considerable force. To practice feminism is therefore to encounter both frustration and widespread disapproval. It means, Ahmed warns, being seen as selfish, mean, and chronically dissatisfied-the bringer of discord to family dinners and professional meetings alike. For those of us willing to pay the price, Living a Feminist Life assures us we're in good company." -- Susan Fraiman * Critical Inquiry * "Ahmed ... writes theory like nobody else.... Ahmed's book is a feminist gift for its readers. You are invited to enjoy it, the rhythm and all." -- Leena-Maija Rossi * European Journal of Women's Studies * "It's not easy being a feminist and Sara Ahmed has written a powerfu

Sara Ahmed is a feminist writer, scholar, and activist. She is the author of Willful Subjects, On Being Included, The Promise of Happiness, and Queer Phenomenology, all also published by Duke University Press.