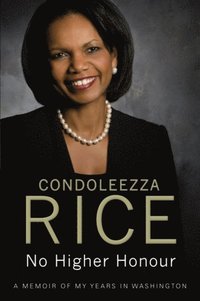 av Condoleezza Rice
E-bok (EPUB - DRM), Engelska, 2011-11-01
Den här boken kan endast laddas ned av privatpersoner.
153
Den här boken kan endast laddas ned av privatpersoner.
Ladda ned
Spara som favorit
Ladda ned och läs i en e-boksläsare. Tips på appar
Finns även som
Visa alla 1 format & utgåvor
From one of the world's most admired women, this is former National Security Advisor and Secretary of State Condoleezza Rice's compelling story of eight years serving at the highest levels of government. A native of Birmingham, Alabama, who overcame the racism of the Civil Rights era to become a brilliant academic and expert on foreign affairs, Rice distinguished herself as an advisor to George W. Bush during the 2000 presidential campaign. Once Bush was elected, she served as his chief adviser on national-security issues - a job whose duties included harmonizing the relationship between the Secretaries of State and Defence. It was a role that deepened her bond with the President and ultimately made her one of his closest confidantes. With the 11 September 2001, terrorist attacks, Rice found herself at the centre of the Administration's intense efforts to keep America safe. Here, Rice describes the events of that harrowing day - and the tumultuous days after . No day was ever the same. Surprisingly candid in her appraisals of various Administration colleagues and the hundreds of foreign leaders with whom she dealt, Rice also offers her keen insight into how history actually proceeds. In No Higher Honour,she deliversa master class in statecraft -- but always in a way that reveals her essential warmth and humility, and her deep reverence for the ideals on which America was founded.
Visa hela texten

CONDOLEEZZA RICE was the 66th US secretary of state and the first black woman to hold that office. Prior to that, she was the first woman ever to serve as national security adviser, was provost of Stanford from 1993 to 1999, and served as the Soviet and East European Affairs adviser during the dissolution of the Soviet Union.