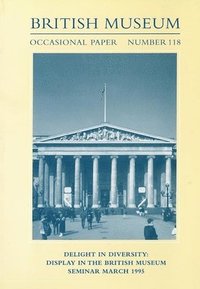 av John Cherry
Häftad Engelska, 1996-12-01
214
Köp
Spara som favorit
A transcription of a day-long seminar held at the British Museum in 1995 to discuss aspects of display at the museum. Invited guests examined specific displays and were joined by many of the staff and other curators. A stimulating discussion ensued which makes fascinating reading for all involved with heritage management.
Visa hela texten

John Cherry looked after medieval metalwork at the British Museum from 1964 to 2002. In 2016 he published Richard Rawlinson and his Seal Matrices: Collecting in the Early Eighteenth Century, and `Patronage and purpose: goldsmiths and the engraving of silver seal matrices in late Medieval England' in Orfeverie gothique en Europe: production et reception, ed. E.A. Koenig and M. Tomasi.