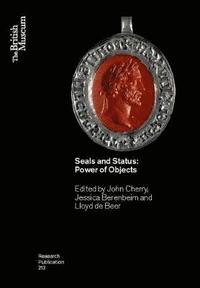 av John Cherry, Jessica Berenbeim, Lloyd De Beer
Häftad Engelska, 2018-04-27
469
Köp
Spara som favorit
For 7,000 years seals have functioned as signs of authority. This publication deals specifically with aspects of status in the history of seals, exploring this theme across a diverse range of cultural contexts-from the 9th century up to the Early Modern period, and, across the world, looking at Byzantine, European, Islamic and Chinese examples. These objects are united by the significant role they play in social status hierarchies, in the status of institutions, indications of power and finally in notions of relative status among objects themselves. In addition to their chronological and geographical diversity, these studies concentrate on many different phases of seal use. Therefore, together they highlight the importance of studying the full life cycle of seals, from the way in which they were made and used through to their cancellation, loss and sometimes destruction. The volume will look at seals used by all members of society, from kings to fishmongers, and will examine the history of objects, with examples ranging from the medieval matrix with a classical gem showing the Roman Emperor Antoninus Pius to the 17th-century Providence Island matrix from America. This publication complements the British Museum's ongoing programme of the digitisation of the Museum's collection of medieval seal matrices which will widen access to this fascinating body of material.
Visa hela texten

John Cherry looked after medieval metalwork at the British Museum from 1964 to 2002. In 2016 he published Richard Rawlinson and his Seal Matrices: Collecting in the Early Eighteenth Century, and 'Patronage and purpose: goldsmiths and the engraving of silver seal matrices in late Medieval England' in Orfeverie gothique en Europe: production et reception, ed. E.A. Koenig and M. Tomasi. Jessica Berenbeim is a Long-term Fellow in Cultural and Intellectual History at the Warburg Institute, School of Advanced Study, University of London. She was a Fellow by Examination at Magdalen College, Oxford, from 2012 to 2016, and she is the author of Art of Documentation: Documents and Visual Culture in Medieval England (2015). Lloyd de Beer is a curator with responsibility for the late medieval collection at the British Museum. His research is primarily concerned with English art and architecture of the Middle Ages. He is currently working on the alabaster sculptures of medieval England.