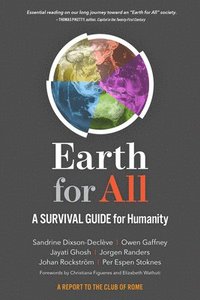 A Survival Guide for Humanity

av Sandrine Dixson-Decleve, Owen Gaffney, Jayati Ghosh, Jorgen Randers, Johan Rockstrom
Häftad Engelska, 2022-09-20
224
Köp
Spara som favorit
Kan tyvärr inte levereras innan julafton.
Finns även som
Visa alla 2 format & utgåvor
The economic operating system keeps crashing. It's time to upgrade to a new one. Five decades ago, The Limits to Growth shocked the world by showing that population and industrial growth were pushing humanity towards a cliff. Today the world recognizes that we are now at the cliff edge: Earth has crossed multiple planetary boundaries while widespread inequality is causing deep instabilities in societies. There seems to be no way out. Earth For All is both an antidote to despair and a road map to a better future. Using powerful state-of-the-art computer modeling to explore policies likely to deliver the most good for the majority of people, a leading group of scientists and economists from around the world present five extraordinary turnarounds to achieve prosperity for all within planetary limits in a single generation. Coverage includes: Results of new global modeling that indicates falling well-being and rising social tensions heighten risk of regional societal collapses Two alternative scenarios - Too-Little-Too-Late vs The Giant Leap - and what they mean for our collective future Five system-shifting steps that can upend poverty and inequality, lift up marginalized people, and transform our food and energy systems by 2050 A clear pathway to reboot our global economic system so it works for all people and the planet. Written in an open, accessible, and inspirational style using clear language and high impact visuals, Earth For All is a profound vision for uncertain times and a map to a better future. This survival guide for humanity is required reading for everyone concerned about living well on a fragile planet.
Visa hela texten

It's time to shift from the age of endless growth to an age of thriving in balance. This thought-provoking analysis proposes five critical turn-arounds for getting us there- each of them raising urgent issues for public discussion and action. Read on to explore possible futures for humanity and join the most vital debate of our times. -Kate Raworth, author, Doughnut Economics This tremendous collaboration, documented in this breathtaking book, provides yet more evidence that so much good can come out of pooling our minds and skills, to build a world that works for all. Why not opt for one-planet prosperity, if the alternative is one-planet misery? -Mathis Wackernagel, Ph.D., founder, Global Footprint Network, co-author, Ecological Footprint If we'd paid attention to The Limits to Growth in 1972, we wouldn't be in the fix we're in today; as the modeling in this book makes clear, what's left of this decade may be our last best hope to get it at least partly right. -Bill McKibben, author, The End of Nature This latest, most urgent, and most carefully researched version of system science's scenarios for our human future is essential reading for collapse preventers everywhere. Whether its recommendations are taken up by policy makers everywhere- and whether we humans are therefore able to avert worldwide ecological, economic, and social breakdown sometime during the remainder of the 21st century- is up to all of us. -Richard Heinberg, senior fellow, Post Carbon Institute, author, Power: Limits and Prospects for Human Survival An extraordinary book at an extraordinary time. For today and tomorrow's leaders, Earth for All is a must-read. This book offers a concrete, breakthrough vision on how to ensure well-being for all- in any country- on our finite planet. Together, we can build a world that is genuinely equitable by following the 5 Turnarounds- a roadmap to accelerate the realization of the Sustainable Development Goals in the next decade. I hope it will inspire a new movement of minds and souls that are willing to save our precious humanity. -Ban Ki-moon, 8th Secretary General of the United Nations, and Deputy Chair of The Elders Earth For All conclusively shows that humanity's future on a livable planet depends on drastically reducing socio-economic inequality and a more equitable distribution of wealth and power. Essential reading on our long journey toward an "Earth for All" society. -Thomas Piketty, author, Capital in the Twenty-First Century and A Brief History of Equality This book arrives at a moment in time when humanity is facing its most consequential decade in human history. What we do now will determine whether we have a future to protect. In order to ensure our survival, we must understand the interconnected nature of the current convergence of crises we are dealing with. Earth for All illustrates this understanding and uses it to show us a path forward that will put the wellbeing of people and our planet first, instead of profit and growth. -Kumi Naidoo, global ambassador, Africans Rising for Justice, Peace, and Dignity Too many cooks, they say, but in this case we are talking chefs. Indeed, the multiple authorship of Earth For All ensures both hugely satisfying food for thought and high-energy fuel for action. The two scenarios, "Too Little, Too Late" and "The Giant Leap," will help readers to confront the existential realities now facing us, while the proposed recipes for change will help guide the those of us who value the future and are ready to roll up our sleeves in pursuit of better futures for all. -John Elkington, founder and chief pollinator, Volans, and author, Green Swans: The Coming Boom In Regenerative Capitalism Timely, brilliant book. Earth For All describes a concrete roadmap to transform our economies and defeat poverty whilst protecting planet Earth. An inspirational read for both grassroots groups and national leaders. Will we hear? Will we m

Sandrine Dixson-Decleve, is co-president of the Club of Rome, and has over 30 years' experience with European and international policy, business leadership, and strategy, with a particular focus on EU and international climate change, sustainable development, green growth, conventional and sustainable energy solutions, and sustainable finance. Recognized by GreenBiz as one of the 30 most influential women across the globe driving change in the low-carbon economy and promoting green business, she has spent her career bringing together business leaders, policy makers, academia, and NGOs. A member of the Guardian's Sustainable Business Advisory Board, Dixson-Decle ve is a TED and TEDx speaker and has published numerous articles and book chapters and given presentations on green growth and competitiveness, innovation, energy solutions, climate change, sustainable development, transport, and conventional and alternative fuel quality legislation, as well as on trade and environment. She is the author of Quel Monde Pour Demain? Owen Gaffney is a writer, editor, and global sustainability analyst at Stockholm Resilience Centre, and Potsdam Institute for Climate Impact Research. He is a science journalist and filmmaker who has spent the last two decades embedded in Earth system research, publishing research relevant to international policy. Gaffney is founder of the Exponential Roadmap Initiative and Gaiaxia, a new multimedia company. He was an associate producer on the recent Netflix documentary Breaking Boundaries and has advised on BBC and Netflix series including EarthShot (2021) and Our Planet. As well as academic publications, he writes and edits articles, features, and speeches, and has produced high-impact productions for TED, World Economic Forum, and WWF. Jayati Ghosh taught economics at Jawaharlal Nehru University, New Delhi, and is professor of economics at the University of Massachusetts. In 2021, the United Nations nominated her to the High-level Advisory Board on Economic and Social Affairs. She has authored and/or edited 19 books and nearly 200 scholarly articles. Ghosh has received several national and international prizes, including the International Labour Organisation's Decent Work Research Prize for 2010. She has advised governments in India and other countries, including as chairperson of the Andhra Pradesh Commission on Farmers' Welfare in 2004 and as a member of the National Knowledge Commission of India (2005-09). Ghosh is the Executive Secretary of International Development Economics Associates. She has consulted for international organizations including ILO, UNDP, UNCTAD, UN-DESA, UNRISD, and UN Women, and is a member of several international commissions. She contributes regularly to many high-profile newspapers, journals, and online blogs. Jorgen Randers is professor emeritus of climate strategy at the BI Norwegian Business School and was deputy director general of WWF International (World Wildlife Fund) in Switzerland. A prominent leader on the intersections of economy, the environment, and human well-being, he lectures internationally on sustainable development and climate and advises governments, businesses, and NGOs all over the world. In 1972, Randers co-authored the international bestseller The Limits to Growth. He also co-authored the highly successful 30-year update to the book. Jorgen's book 2052, released in 2012, sold more than 100,000 copies across the world in its first year. Randers is a member of the Club of Rome and is the founding chair of the China Association for the Club of Rome. Johan Rockstroem is the director of the Potsdam Institute for Climate Impact Research, one of the world's leading centres for climate science, and is founder of the Stockholm Resilience Centre. He led the international team of scientists that proposed the influential planetary boundaries framework. Rockstroem is a regular speaker at the World Economic Forum, the World Bank, and the United Nations. He has

Contributors Foreword by Christiana Figueres Foreword by Elizabeth Wathuti 1. Earth for All: Five Extraordinary Turnarounds for Global Equity on a Healthy Planet Breakdown or Breakthrough? A Brief History of Future Scenarios From The Limits to Growth to Planetary Boundaries The Earth for All Initiative People Support Economic Systems Change 2. Exploring Two Scenarios: Too Little Too Late or Giant Leap? A Brief Review of 1980 to 2020 Scenario 1: Too Little Too Late Scenario 2: The Giant Leap Which Scenario Do We Co-create? 3. Saying Goodbye to Poverty What Is Our Current Problem? Turning Poverty Around Solution 1: Expand Policy Space and Deal with Debt Solution 2: Transform the Financial Architecture Solution 3: Transform Global Trade Solution 4: Improve Access to Technology and Leapfrogging Barriers to the Solutions Conclusions 4. The Inequality Turnaround: "Sharing the Dividends" The Problems with Economic Inequality A Giant Leap Toward Greater Equality Overcoming Barriers to the Equality Levers Conclusions 5. The Empowerment Turnaround: "Achieving Gender Equity" Population Turning It All Around Transforming Education Financial Independence and Leadership A Secure Pension and Dignified Aging Conclusions 6. The Food Turnaround: Making the Food System Healthy for People and Planet Consuming Earth's Biosphere Solution 1: Revolutionize the Way We Farm Solution 2: Change Our Diets Solution 3: Eliminate Food Loss and Waste Barriers Conclusions 7. The Energy Turnaround: "Electrifying Everything" Challenges Don't Look Up Solution 1: Introduce Systemic Efficiency Solution 2: Electrify (almost) Everything Solution 3: Exponential Growth in New Renewables The Energy Turnaround in the Earth4All Analysis Barriers Conclusions 8. From "Winner Take All" Capitalism to Earth4All Economies A New Economic Operating System The Rise of Rentier Capitalism Rethinking the Commons in the Anthropocene The Conventional Economic Gameboard Redrawing the Gameboard Short-termism: The Road to a Parasitic Financial System Putting the Systems Change into Effect How to Resolve the Systems Failure Conclusions 9. A Call to Action Is Earth for All Closer Than We Think? A Chorus of Voices Appendix: The Earth4All Model Model Purpose Model History The Main Sectors in the Model Model Causal Loop Diagram Model Novelty The Earth for All Game Notes Index About the Authors About the Publisher