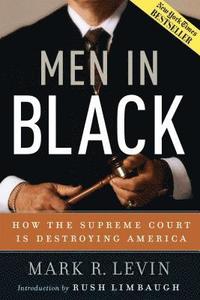 How the Supreme Court is Destroying America

av Mark R Levin
Inbunden Engelska, 2005-01-01
453
Köp
Spara som favorit
Finns även som
Visa alla 1 format & utgåvor
"A modern conservative classic." - Sean Hannity "Men in Black couldn't be more timely or important....a tremendously important and compelling book." - Rush Limbaugh "One of the finest books on the Constitution and the judiciary I've read in a long time....There is no better source for understanding and grasping the seriousness of this issue." - Edwin Meese III "The Supreme Court has broken through the firewalls constructed by the framers to limit judicial power." "America's founding fathers had a clear and profound vision for what they wanted our federal government to be," says constitutional scholar Mark R. Levin in his explosive book, Men in Black. "But today, our out-of-control Supreme Court imperiously strikes down laws and imposes new ones to suit its own liberal whims--robbing us of our basic freedoms and the values on which our country was founded." In Men in Black: How the Supreme Court Is Destroying America, Levin exposes countless examples of outrageous Supreme Court abuses, from promoting racism in college admissions, expelling God and religion from the public square, forcing states to confer benefits on illegal aliens, and endorsing economic socialism to upholding partial-birth abortion, restraining political speech, and anointing terrorists with rights. Levin writes: "Barely one hundred justices have served on the United States Supreme Court. They're unelected, they're virtually unaccountable, they're largely unknown to most Americans, and they serve for life...in many ways the justices are more powerful than members of Congress and the president.... As few as five justices can and do dictate economic, cultural, criminal, and security policy for the entire nation." In Men in Black, you will learn: How the Supreme Court protects virtual child pornography and flag burning as forms of free speech but denies teenagers the right to hear an invocation mentioning God at a high school graduation ceremony because it might be "coercive." How a former Klansman and virulently anti-Catholic Supreme Court justice inserted the words "wall of separation" between church and state in a 1947 Supreme Court decision--a phrase repeated today by those who claim to stand for civil liberty. How Justice Harry Blackmun, a one-time conservative appointee and the author of Roe v. Wade, was influenced by fan mail much like an entertainer or politician, which helped him to evolve into an ardent activist for gay rights and against the death penalty. How the Supreme Court has dictated that illegal aliens have a constitutional right to attend public schools, and that other immigrants qualify for welfare benefits, tuition assistance, and even civil service jobs.
Visa hela texten