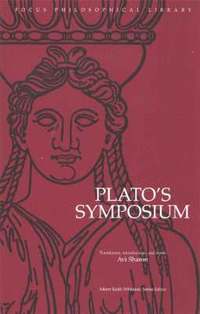 av Plato
Häftad Engelska, 1998-01-01
77
Bevaka
Spara som favorit
Ännu ej utkommen – klicka "Bevaka" för att få ett mejl så fort boken boken går att köpa.
Finns även som
Visa alla 4 format & utgåvor
This is an English translation of Plato account of an important dialogue on the nature of love between Phaedrus, Pausanias, Eryximachus, Aristophanes, Agathon, Socrates and Alcibiades. Focus Philosophical Library translations are close to and are non-interpretative of the original text, with the notes and a glossary intending to provide the reader with some sense of the terms and the concepts as they were understood by Plato's immediate audience.
Visa hela texten

The Symposium challenges the translator who is also a poet in its range of styles which is unique among the Platonic dialogues. Not only dues the translator have to mimic the distinct style of the narrator, Apollodoros, and the seven symposiasts...he has to mind and represent the action in this the most dramatic of the Platonic dialogues. Sharon's translation meets these challenges and is a brilliant recovery of the style and drama of the Symposium. I know of no other translation that is so appropriately various in the styles adopted by and for the speakers or which is so attentive to the drama of this dialogue which celebrates a tragic victory. -- Diskin Clay, Duke University

Avi Sharon is a professor of Classics and has taught in New York Boston and Athens, Greece. He is active as a translator of ancient Greek, Italian and Hebrew. And has published in such journals as "Arion", "Partisan Review" and "Dialogos". He is the 1996 recipient of the Alexander Onassis Feloowship for scholars of Greek.