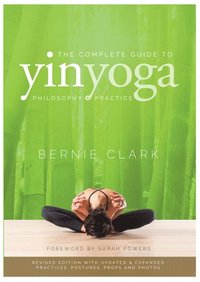 The Complete Guide to Yin Yoga

The Philosophy and Practice of Yin Yoga

av Bernie Clark
(2 röster)  |  Läs 2 recensioner
Häftad Engelska, 2019-10-17
212
Köp
Spara som favorit
Finns även som
Visa alla 2 format & utgåvor
This second edition of the best selling The Complete Guide to Yin Yoga provides an in-depth look at the philosophy and practice of Yin Yoga with illustrated sections on how to practice Yin Yoga, including detailed descriptions and photographs of over 30 Yin Yoga asanas. This is an updated version of the book that has become the go-to resource for Yin Yoga teachers all over the world and has been required reading in many teacher training programs. All forms of yoga can provide benefits physically, emotionally, and mentally, however Yin Yoga works the deeper levels of the body/heart/mind: the yin tissues of fascia, tendons, ligaments, joints and bones, as well as the energetic channels of the meridians, nerves and blood system. One big difference noticed by students of Yin Yoga is the long-held, passive nature of the posture, which gives time for a deeper journey to unfold, a journey into the meditative aspects of yoga, a bridge to living life mindfully. The second edition includes-a more functional approach to the practice of yoga, emphasizing the concept of targeted areas; the importance of stress in reducing fragility and building antifragility; understanding the nature of creep and the importance of counterposes, with a revised list of effective counterpostures; many new photographs of the postures and their variations for different body types; a more current overview of the physiology of tissues and the energy body reflecting new understanding in the science of fascia and cellular signaling; and many other enhancements. As in the first edition, the book presents comprehensive information on how to do the practice, including how to get into and out of the pose, contraindications and warnings for those who may have trouble with particular aspects of the posture, and other important information. Why we do the practice is discussed by looking at its benefits in three main sections: the physiological, energetic and mental/emotional benefits.
Visa hela texten

"Bernie Clark's The Complete Guide to Yin Yoga is one of the best yoga resources now available." - Paul Grilley, author of Yin Yoga: Outline of a Quiet Practice Yin Yoga is a practice much needed in today's difficult, divisive times. It offers us a way to leave behind our ideas of how we should be, and return to our true selves, where all lasting healing takes place. Bernie Clark has written a wonderfully detailed account of the history, philosophy, and practice of Yin Yoga. I recommend it not only for those interested in Yin Yoga, but for all yoga practitioners. - Biff Mithoefer, author of The Yin Yoga Kit

Bernie Clark loves learning about and then sharing the things that fascinate him. As a child, he enjoyed studying the world and how it works, and as a teen, he loved thinking about the mind and the soul. The seemingly contradictory interests in science and spirituality continued to shape his philosophy of life well into his adult years. With one foot in the commercial world of space and computer technologies and another in the realm of meditation and yoga, he sought bridges between Eastern and Western maps of reality. These maps and bridges are described in his teachings and writings with the hope that others who share his fascinations will be able to enjoy what he has learned, without having to go through the labor of detailed research. Bernie has a degree in science and spent 30 years as a senior executive in the high-tech/space industry. He embarked upon meditation in the 1970s and began teaching yoga in the 1990s. He conducts yoga teacher trainings several times a year in Vancouver, Canada. To stay informed of Bernie's activities, visit his website, www.YinYoga.com, where you can subscribe to his Yinsights newsletter. Sarah Powers began teaching in 1987. She is the founder and author of Insight Yoga, which interweaves the insights and practices of Yoga, Buddhism, Taoism, and Transpersonal Psychology into an integral practice to discover and enliven the body, heart and mind. Her yoga style blends both a Yin sequence of floor poses to enhance the meridian and organ systems, combined with an alignment-based slow flow or Yang practice, influenced by Viniyoga, Ashtanga, Iyengar teachings, and QI gong. Sarah feels that enlivening the physical and pranic bodies, as well as learning to meet our psychological reactivity is paramount for preparing one to deepen and nourish insights into one's essential nature - a natural state of awareness. She has completed level 3 of Internal Family Systems Therapy training and has been a student of Transpersonal Psychology for 28 years. She also draws from her in-depth training in the Vipassana, Tantric and Dzogchen practices of Buddhism. Her main influences have been Tsoknyi Rinpoche, Jennifer Welwood, Lama Tsultrim Allione, Bhante Gunaratana, Lama Pema Dorje, Stephen and Martine Batchelor, B. Alan Wallace, and Anam Thubten.