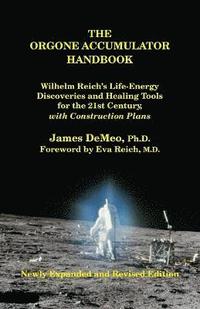 av James Demeo
Häftad Engelska, 2010-07-25
310
Köp
Spara som favorit
In the 1940s, Dr. Wilhelm Reich claimed discovery of a new form of energy. Declaring "the orgone energy does not exist," U.S. courts ordered all books on the orgone subject to be banned. Reich was thrown into prison, where he died. Dr. DeMeo examines Reich's evidence and reports on his own observations and laboratory experiments, which confirm the reality of the orgone phenomenon.
Visa hela texten

James DeMeo, PhD, formally studied the Earth, Atmospheric, and Environmental Sciences at Florida International University and later at the University of Kansas, where he earned his PhD in 1986. At KU, he openly undertook the first graduate-level natural scientific research specifically focused upon Wilhelm Reich's controversial discoveries, subjecting those ideas to rigorous testing, with positive verification of the original findings. DeMeo subsequently undertook field research in the arid American Southwest, Egypt, Israel, sub-Saharan Eritrea, and Namibia, Africa. His work on the Saharasia question constituted the most ambitious global cross-cultural research study to date, on the subjects of human behavior, family and sexual life around the world. His published works include dozens of articles and compendiums, and several books, including Saharasia, The Orgone Accumulator Handbook, and In Defense of Wilhelm Reich. He was editor of On Wilhelm Reich and Orgonomy and Heretics' Notebook, and of the journal Pulse of the Planet, and co-editor for the German-language compendium Nach Reich: Neue Forschung zur Orgonomie. DeMeo served on the faculty of Geography at the University of Kansas, Illinois State University, University of Miami and University of Northern Iowa. In 1978, he founded the Orgone Biophysical Research Lab (OBRL), where he continues as Director. In 1994 the OBRL Greenspring Center was established, a high-altitude research facility in the Siskiyou Mountains near to Ashland, Oregon, exhibiting optimal conditions for sensitive orgone energy experiments. At the new OBRL facility, he continues with experimental work and writing, and hosts the occasional seminar.