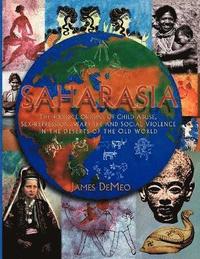 The 4000 BCE Origins of Child Abuse, Sex-Repression, Warfare and Social Violence, In the Deserts of the Old World

av James Demeo
Häftad Engelska, 2011-05-20
482
Köp
Spara som favorit
Ancient humans were peaceful - modern violence is avoidable. That's the basic message contained in "Saharasia", a controversial "marriage of heresies" over 10 years in the making. It will change forever your way of looking at the world, your home culture, and current events.
Saharasia constitutes a revolutionary new discovery on a geographic pattern to global human behavior as deeply embedded within the scientific literature of anthropology, history and archaeology. It covers issues and events which typically are ignored in the "politically correct" academic environment, even though it was produced within that same environment. Saharasia presents the first cross-cultural, anthropological, archaeological and historical survey of human family and social institutions, tracing human violence back in time to specific times and places of first-origin. Saharasia also presents an additional controversy, given the factual identity of the violence-prone Saharasian region to be the homeland of the Islamo-fascist terror brigades. Saharasia has at several times in human history been the region from which massive armies marched out to conquer those moister regions lying at its periphery: into Europe, China, India and sub-Saharan Africa. These would be the early Indo-Aryan, Kurgan and Battle-Axe warriors, the Scythians and Huns, the Mongols, Turks, and Arab-Muslims, all of whom formed gigantic empires encompassing desert Saharasia and parts of its moister borderlands. While the analysis contained in this book starts around 12,000 BC and ends at around 1900 AD, the suggestion is clear, that the modern problem of global terrorism also springs forth from basic Saharasian-warrior roots. If you really want to know why so much of the world is in such a miserable condition, and to fully understand the current "march to war" within Islamic nations, this book will provide answers.

One of the largest and most ambitious scientific and systematic, cross-cultural evaluations of human behavior ever undertaken.
Originally a doctoral dissertation undertaken by the author at the University of Kansas, now supplemented with new chapters, and with hundreds of maps and illustrations. "Saharasia" is scarsely known to the wider public, given the controversial conclusions which precipitated from its development. But its findings, made as early as 1980, have been validated repeatedly by subsequent scientific discovery, and by world events. The new edition contains all-new Appendix documentation: "Update on Saharasia"reviewing archaeological evidence suggestive of an ancient period of generally peaceful human social conditions, world-wide.
Visa hela texten