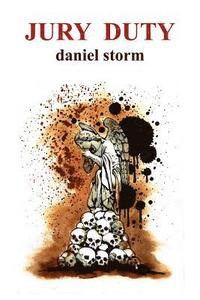 av Daniel Storm
Häftad Engelska, 2012-01-18
179
Köp
Spara som favorit
This story is a tale of retribution taken on behalf of a loved one, to a quantum measure. Eddie Veins does the unimaginable, as he systematically hunts down and executes an entire jury over a six-year period. When a journalist for a Chicago newspaper discovers the audacity and gruesome realities associated with Eddie's murderous exploits and notifies the chief of detectives for the Chicago Police Department, he sets off a thunderstorm of activity in the Justice Department and the executives sworn to uphold American jurisprudence, as they move to covertly cover up the enormity of Eddie's deeds, realising that the implications of the extermination of an entire jury would send chilling emotions and fears of serving as a juror as part of their civic duty. When the reader believes they have the story figured out, they are shocked to find that they were misled or mistaken in their hypothesis.
Visa hela texten

Daniel Storm is Native American and ascribes to the Blackfoot heritage and ways. He grew up in Illinois and Wisconsin, where he attended the University of Wisconsin and ultimately studied law. After college, he participated in defending some of America's most notable crime figures, while associated with prestigious law firms. As an author of numerous crime/fiction novels, he spends hours creating stories that compel readers to devote their undivided attention to his unique, original plots. Internationally, he is on the threshold of tremendous success, despite personally retaining control of his stories, the production of his books and their distribution. Storm is a Viet Nam Vet and is active in his community in assisting families of those in the military who are especially in need, both families of active soldiers and veterans. He lives near Milwaukee with his German Shepherd, Merlin, and enjoys a ride on his Harley through Wisconsin's backroads, weather permitting!