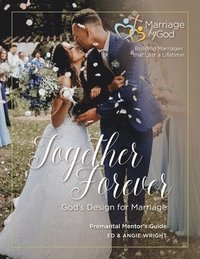 av Ed & Angie Wright
Häftad Engelska, 2022-09-29
199
Köp
Spara som favorit
Together Forever Mentor's Guide will provide a married Christian couple with all the tools and guidance necessary to mentor an engaged couple on how to live God's design for marriage. The engaged couple will use the companion Together Forever Workbook. Each question in the workbook is designed to teach a specific principle or practice. The Mentor's Guide will provide the information to communicate through each question. In addition, the engaged couple will be asked to do reading, homework, fun exercises, and meaningful activities between sessions. Along with the wisdom the mentor couple has gained from their own life experiences, this Mentor's Guide will equip them to share God's love in a relationship-changing couple-to-couple way. There is no greater gift than being a blessing in the life of another. When this blessing is in the form of enriching another couple's marriage, the impact is far-reaching.
Visa hela texten

Ed and Angie began mentoring couples at Saddleback Church in 2000, and since then, they have mentored hundreds of premarital and married couples. The Wrights wrote their first lay-counseling workbooks for Saddleback Church in 2002. Recognizing the value of this unique couple-to-couple format they founded Marriage by God. The materials they have developed have been received enthusiastically nationally and internationally on four continents. The Wrights have been married since 1978, and have two grown-up sons, a beautiful daughter-in-law, and two adorable granddaughters. They make their home in Mission Viejo, California, where they have built a successful real estate business.