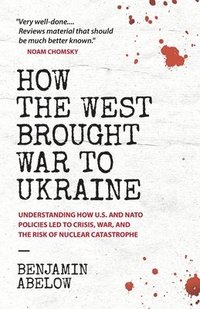 How the West Brought War to Ukraine

Understanding How U.S. and NATO Policies Led to Crisis, War, and the Risk of Nuclear Catastrophe

"This is a splendid little book, tautly written, logically organized, easy to read...."

According to the mainstream Western narrative, Vladimir Putin is an insatiable, Hitler-like expansionist who invaded Ukraine in an unprovoked land grab.

That story is incorrect.

In reality, the misguided policies of the United States and NATO provoked the crisis and led to war. It is the U.S. and its European allies-not Vladimir Putin-that bear primary responsibility for the disaster in Ukraine.

In How the West Brought War to Ukraine, author Benjamin Abelow lays out the relevant history and explains how the West needlessly produced conflict, subjecting its own citizens-and the rest of the world-to the risk of nuclear war.

Endorsed by Noam Chomsky, Ambassador Jack Matlock, Colonel Douglas Macgregor, political scientist John Mearsheimer, and other leading defense experts and policy analysts, this brief and highly readable book shows how the West caused the crisis and now labors under an existential threat of its own making.

How the West Brought War to Ukraine looks beneath the surface of recent events. It lets readers understand the deeper sources of the Ukraine war and provides new insights into how the conflict might be resolved.

"a brilliant, remarkably concise explanation of the danger that U.S. and NATO military involvement in Ukraine has created."

"[a]n invaluable primer on the trends and events that produced the escalating warfare in ukraine."

"for those concerned about u.s. national security and the peace of europe, this book is essential reading."

"for anyone interested in understanding the true causes of the disaster in ukraine, How the West Brought War to Ukraine is required reading."

-John J. Mearsheimer, author of The Tragedy of Great Power Politics, is the R. Wendell Harrison Distinguished Service Professor of Political Science at the University of Chicago

"benjamin abelow demonstrates that the crisis in ukraine was predictable, predicted-and avoidable."

-Richard Sakwa, author of The Putin Paradox and Frontline Ukraine, is Professor of Russian and European Politics, University of Kent

"in the ukraine proxy war between the united states/nato and russia, we face a threat of nuclear escalation that could end human civilization. abelow's book is essential reading for all who wish to understand this threat and why, 30 years after the collapse of the soviet union, it has re-emerged."

-Gilbert Doctorow, author of Memoirs of a Russianist, is an historian and independent Russia specialist based in Brussels

"ben abelow takes us beyond the false narratives and into the truth of the ukraine crisis.

Benjamin Abelow is a researcher and writer who holds a B.A. in European History from the University of Pennsylvania and an M.D. from the Yale University School of Medicine. He previously worked in Washington, D.C., lecturing, writing, and lobbying Congress about nuclear arms policy. His other areas of interest include the academic study of religion and the psychology of trauma. You can contact the author at: b.abelow.2022@gmail.com

introduction: how the narrative drives the war

3. putting the shoe on the other foot

8. a counterfactual history - and conclusion