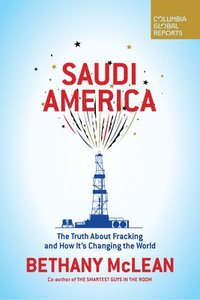 The Truth About Fracking and How It's Changing the World

av Ms Bethany McLean
Häftad Engelska, 2018-09-27
169
Köp
Spara som favorit
Finns även som
Visa alla 1 format & utgåvor
Bestselling author Bethany McLean reveals the true story of fracking's impact-on Wall Street, the economy and geopolitics. "A sharp portrait of the US shale revolution." -Financial Times The technology of fracking in shale rock-particularly in the Permian Basin in Texas- has transformed America into the world's top producer of both oil and natural gas. The U.S. is expected to be "energy independent" and a "net exporter" in less than a decade, a move that will upend global politics, destabilize Saudi Arabia, crush Russia's chokehold over Europe, and finally bolster American power again. Or will it? Investigative journalist Bethany McLean digs deep into the cycles of boom and bust that have plagued the American oil industry for the past decade, from the financial wizardry and mysterious death of fracking pioneer Aubrey McClendon, to the investors who are questioning the very economics of shale itself. McLean finds that fracking is a business built on attracting ever-more gigantic amounts of capital investment, while promises of huge returns have yet to bear out. Saudi America tells a remarkable story that will persuade you to think about the power of oil in a new way.
Visa hela texten

Named one of Vanity Fair's 11 Nonfiction Books to Read this Fall 800-CEO Reads Editor's Choice: "McLean exposes the faulty foundation not only of our supposed energy independence, but of the very desire for it....The sloganeering of "drill, baby, drill," and the false, geopolitically fraught hope of energy independence it implies, ignores these basic business, economic, and existential human realities. In exposing them, McLean offers hope for a more reasonable discussion, a more sustainable and profitable industry, and, perhaps, a more integrated energy policy." "As journalist Bethany McLean sketches with clarity and concision in this book, the shale revolution has had profound effects on the US, creating jobs and cutting energy costs, but many of the claims made for it have been overblown.... Unlike some who have taken a skeptical view of the shale industry, McLean is not trying to debunk it-those who have tried have been made to look foolish by its success in recent years -but she does urge us to be cautious about being too trusting." -Financial Times "Bethany McLean explores fracking's nuanced success, but also cautions that this energy revolution is not the country's golden ticket to energy independence." -NPR, Marketplace "McLean, who was a co-author of the bestseller The Smartest Guys in the Room, has tapped into the recent history of the U.S. oil and gas boom. She describes geology in plain English, recounts the rise and fall of one of the country's most flamboyant shale gas tycoons, and studies the political consequences of a United States that is far less dependent on oil imports than it was just a decade ago." -The Washington Post "Who cares about another crooked, over-compensated CEO? Bethany McLean does. She is the co-author of the brilliant dissection of the Enron scandal The Smartest Guys in the Room, and has written a slim book called Saudi America for Columbia Global Reports. The book suggests McClendon's life is more than just a tale of a greedy, white, male executive whirling through the upper echelon of American life. McClendon was fracking incarnate. And we need to understand fracking because it may be the cause of the next economic collapse." -Los Angeles Review of Books

Bethany McLean is the co-author of the bestseller The Smartest Guys in the Room: The Amazing Rise and Scandalous Fall of Enron with Peter Elkind. Her second book, which she co-authored with Joe Nocera, is All the Devils are Here: The Hidden History of the Financial Crisis. Her most recent book is Shaky Ground: The Strange Saga of the U.S. Mortgage Giants. She is a contributing editor at Vanity Fair and lives in Chicago.