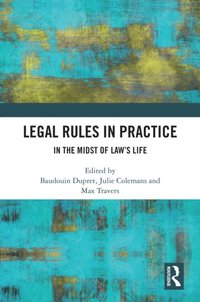 In the Midst of Law's Life

av Baudouin Dupret, Julie Colemans, Max Travers
E-bok (EPUB - DRM), Engelska, 2020-12-30
439
Ladda ned
Spara som favorit
Laddas ned direkt
Läs i vår app för iPhone, iPad och Android
Finns även som
Visa alla 2 format & utgåvor
Understanding legal rules not as determinants of behavior but as points of reference for conduct, this volume considers the ways in which rules are invoked, referred to, interpreted, put forward or blurred. It also asks how both legal practitioners and lay participants conceive of and participate in the construction of facts and rules, and thus, through decisions, defenses, pleas, files, evidence, interviews and documents, actively participate in law's life. With attention to the formulation of notions such as person, evidence, intention, cause and responsibility in the course of legal practices, Legal Rules in Practice provides the outlines of a praxiological anthropology of law - an anthropology that focuses on words, concepts and reasoning as actively used to solve conflicts with the help of legal rules. As such, it will appeal to sociologists, anthropologists and scholars of law with interests in ethnomethodology, rule-based conduct and practical reasoning.
Visa hela texten