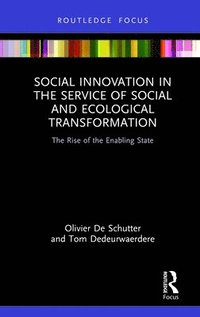 Social Innovation in the Service of Social and Ecological Transformation

The Rise of the Enabling State

av Olivier De Schutter, Tom Dedeurwaerdere
Inbunden Engelska, 2021-10-15
959
Köp
Spara som favorit
Finns även som
Visa alla 2 format & utgåvor
This book explores how the State can play a role as an enabler of citizens-led social innovations, to accelerate the shift to sustainable and socially just lifestyles. To meet the twin challenges of environmental degradation and the rise of inequalities, societal transformation is urgent. Most theories of social change focus either on the role of the State, on the magic of the market, or on the power of technological innovation. This book explores instead how local communities, given the freedom to experiment, can design solutions that can have a transformative impact. Change cannot rely only on central ordering by government, nor on corporations suddenly acting as responsible citizens. Societal transformation, at the speed and scope required, also should be based on the reconstitution of social capital, and on new forms of democracy emerging from collective action at the local level. The State matters of course, for the provision of both public services and of social protection, and to discipline the market, but it should also act as an enabler of citizen-led experimentation, and it should set up an institutional apparatus to ensure that collective learning spreads across jurisdictions. Corporations themselves can ensure that society taps the full potential of citizens-led social innovations: they can put their know-how, their access to finance, and their control of logistical chains in the service of such innovations, rather than focusing on shaping consumers' tastes or even adapting to consumers' shifting expectations. With this aim in mind, this book provides empirical evidence of how social innovations, typically developed within "niches", initially at a relatively small scale, can have society-wide impacts. It also examines the nature of the activism deployed by social innovators, and the emergence of a "do-it-yourself" form of democracy. This book will appeal to all those interested in driving societal change and social innovation to ensure a sustainable and socially just future for all.
Visa hela texten

Olivier De Schutter is the United Nations Special Rapporteur on Extreme Poverty and Human Rights. De Schutter previous served as Secretary General of the International Federation for Human Rights (FIDH) and the United Nations Special Rapporteur on the Right to Food, a mandate which he fulfilled between 2008 and 2014. He is also a Professor of Law at UCLouvain and at SciencesPo, France, and is a member of the Global Law School Faculty at New York University, USA. He is the co-editor of the Routledge Handbook of Food as a Commons (2018). Tom Dedeurwaerdere is Professor of Philosophy of Science at the Universite catholique de Louvain (UCL), Louvain-la-Neuve, Belgium. He is director of the research unit BIOGOV and co-founder of the Open partnership research on Ecological and Social Transition. He is the author of Sustainability Science for Strong Sustainability (2014).