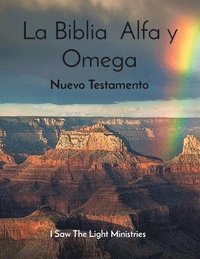 av I Saw The Light Ministries
Häftad Spanska, 2022-02-18
159
Köp
Spara som favorit
This special Spanish translation of The Alpha & Omega Bible (AOB) New Testament considers the oldest ancient bible manuscripts such as the Codex Sinaiticus, the Codex Alexandrinus, and the Codex Vaticanus and many other ancient manuscripts.

The original scriptures have been repeatedly translated for thousands of years. But along the way, mankind has added to and taken away from it, as was warned in the last verses of Revelation. The Alpha & Omega Bible (AOB) restores much of the original writings, for example using the word "Theos" which the apostles actually wrote instead of "God". This study bible also does not follow suit of the traditional Assyrian Babylonian doctrines of mankind. Political & religious correctness get thrown overboard in preference for the unfiltered, uncompromised truth. Therefore, if you are comfortable with traditional religion and never question traditional denominational doctrines, this is not the study bible for you. But if you truly seek truth and ask the difficult questions, then this study bible will definitely broaden your horizons and challenge traditional thinking.

This New Testament volume includes the words of Jesus in bold, and Old Testament quotations have a special underline. Notes include references to ancient manuscripts, Greek, Aramaic & Hebrew words and verse references. Notes indicate many, but not all, differences between KJV Masoretic text & Alexandrian text. This bible is a must have for every person in pursuit of the absolute truth of the original scriptures.
Visa hela texten