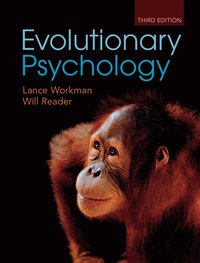 av Lance Workman
Inbunden Engelska, 2014-01-09
1516
Köp
Spara som favorit
Kan levereras innan julafton!
Finns även som
Visa alla 4 format & utgåvor
Written for undergraduate psychology students, and assuming little knowledge of evolutionary science, the third edition of this classic textbook provides an essential introduction to evolutionary psychology. Fully updated with the latest research and new learning features, it provides a thought-provoking overview of evolution and illuminates the evolutionary foundation of many of the broader topics taught in psychology departments. The text retains its balanced and critical evaluation of hypotheses and full coverage of the fundamental topics required for undergraduates. This new edition includes more material on the social and reproductive behaviour of non-human primates, morality, cognition, development and culture as well as new photos, illustrations, text boxes and thought questions to support student learning. Some 280 online multiple choice questions complete the student questioning package. This new material complements the classic features of this text, which include suggestions for further reading, chapter summaries, a glossary, and two-colour figures throughout.
Visa hela texten

'Workman and Reader is a refreshing book in the growing stack of textbooks in evolutionary psychology. Especially from a theoretical perspective it stands out, because it does not present the field as the closed theoretical system one finds in most classic textbooks on the topic. Rather it presents evolutionary psychology as a multifaceted approach to human behaviour; surveying known empirical research and accepted theories while critically speculating about unknown territory. Consequently, the book covers more territory than usually is the case, venturing into parts of developmental, cognitive and social psychology that most other textbooks evade. Together with its accessible style and presentation, this makes Workman and Reader almost an introduction in psychology from an evolutionary perspective, rather than just an introduction in evolutionary psychology; and that is an admirable feat.' Jannes Eshuis, Open University of the Netherlands

'In this third edition to Evolutionary Psychology, Lance Workman and Will Reader clearly explain the essential links among evolutionary principles and behavior. We are indebted to the authors for a thoughtful presentation of this developing area of study and for a unique historical and comparative approach. Students and professionals will benefit.' Del Thiessen, Professor Emeritus, University of Texas, Austin

Lance Workman is Honorary Visiting Professor of Psychology at the University of Glamorgan. Will Reader is a Senior Lecturer in Psychology at Sheffield Hallam University.