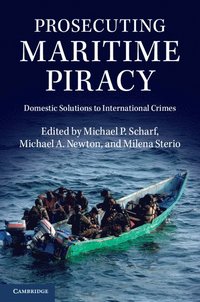 av Michael P Scharf
Inbunden Engelska, 2015-06-09
828
Köp
Spara som favorit
Finns även som
Visa alla 3 format & utgåvor
This book addresses maritime piracy by focusing on the unique and fascinating issues arising in the course of domestic piracy prosecutions, from the pursuit and apprehension of pirates to their trial and imprisonment. It examines novel matters not addressed in other published works, such as the challenges in preserving and presenting evidence in piracy trials, the rights of pirate defendants, and contending with alleged pirates who are juveniles. A more thorough understanding of modern piracy trials and the precedent they have established is critical to scholars, practitioners, and the broader community interested in counter-piracy efforts, as these prosecutions are likely to be the primary judicial mechanism to contend with pirate activity going forward.
Visa hela texten

Michael P. Scharf is interim Dean and the John Deaver Drinko-Baker and Hostetler Professor of Law at Case Western Reserve University School of Law. He is also managing director of the Nobel Peace Prize-nominated Public International Law and Policy Group. He is the author of seventy-five scholarly articles and sixteen books, most recently, Shaping Foreign Policy in Times of Crisis (2010) and Customary International Law in Times of Fundamental Change: Recognizing Grotian Moments (2013). During the elder Bush and Clinton administrations, Scharf served in the Office of the Legal Adviser of the US Department of State. Michael A. Newton is an expert on accountability and conduct-of-hostilities issues and Professor of the Practice of Law at the Vanderbilt University Law School. He has published more than seventy articles and book chapters, as well as opinion pieces for the New York Times, the International Herald Tribune, and other newspapers. In addition to numerous articles on issues of international law, he is the author of Enemy of the State: The Trial and Execution of Saddam Hussein (2009) and the senior editor of Terrorism: International Case Law Reporter (2007-10, updated annually). Milena Sterio is Associate Dean for Faculty Enrichment and the Charles R. Emrick, Jr-Calfee Halter and Griswold Professor at Cleveland State University's Marshall College of Law. She has published in the American University Law Review, the Connecticut International Law Journal, and the Fordham International Law Journal, among others. She is the author of The Right to Self-Determination under International Law: 'Selfistans', Secession and the Great Powers' Rule (2012).