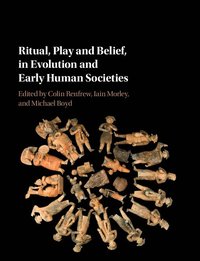 Ritual, Play and Belief, in Evolution and Early Human Societies

av Colin Renfrew
Inbunden Engelska, 2017-12-21
1049
Köp
Spara som favorit
Finns även som
Visa alla 3 format & utgåvor
The origins of religion and ritual in humans have been the focus of centuries of thought in archaeology, anthropology, theology, evolutionary psychology and more. Play and ritual have many aspects in common, and ritual is a key component of the early cult practices that underlie the religious systems of the first complex societies in all parts of the world. This book examines the formative cults and the roots of religious practice from the earliest times until the development of early religion in the Near East, in China, in Peru, in Mesoamerica and beyond. Here, leading prehistorians and other specialists bring a fresh approach to the early practices that underlie the faiths and religions of the world. They demonstrate the profound role of play ritual and belief systems and offer powerful new insights into the emergence of early civilization.
Visa hela texten

Colin Renfrew was formerly Disney Professor of Archaeology and Director of the McDonald Institute for Archaeological Research at the University of Cambridge, and Master of Jesus College Cambridge from 1986 to 1997. He is the author of many publications, including Prehistory: The Making of the Human Mind (2008). He is Fellow of the British Academy, Foreign Associate of the National Academy of Sciences of the USA, and was the recipient of the Balzan Prize in 2004. Iain Morley is Academic Coordinator of the School of Anthropology and Museum Ethnography at the University of Oxford. He has been Lecturer in Palaeoanthropology and Director of the degree in Cognitive and Evolutionary Anthropology at the University of Oxford, and was formerly a Fellow of the McDonald Institute for Archaeological Research. He has produced numerous articles and books, including Becoming Human: Innovation in Prehistoric Material (Cambridge, 2008), Spiritual Culture and Image and Imagination: A Global Prehistory of Figurative Representation (2007), and The Prehistory of Music: Human Evolution, Archaeology and the Origins of Musicality (2013). Michael Boyd is a Senior Research Associate at the McDonald Institute for Archaeological Research at the University of Cambridge. He is Assistant Director of the Keros Island Survey, and co-editor of the Keros publications series. He has published a book on Mycenaean funerary practices, and has co-edited two volumes on funerary archaeology: one with a worldwide perspective, Death Rituals, Social Order and the Archaeology of Immortality in the Ancient World: Death shall have no dominion (Cambridge, 2016), and the other concerned with the Staging Death: Funerary Performance, Architecture and Landscape in the Aegean (2016).