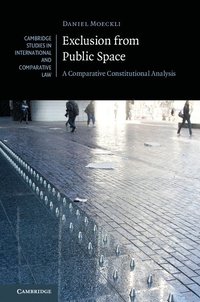 av Daniel Moeckli
Inbunden Engelska, 2016-07-14
1299
Köp
Spara som favorit
Finns även som
Visa alla 3 format & utgåvor
Hardly known twenty years ago, exclusion from public space has today become a standard tool of state intervention. Every year, tens of thousands of homeless individuals, drug addicts, teenagers, protesters and others are banned from parts of public space. The rise of exclusion measures is characteristic of two broader developments that have profoundly transformed public space in recent years: the privatisation of public space, and its increased control in the 'security society'. Despite the fundamental problems it raises, exclusion from public space has received hardly any attention from legal scholars. This book addresses this gap and comprehensively explores the implications that this new form of intervention has for the constitutional essentials of liberal democracy: the rule of law, fundamental rights, and democracy. To do so, it analyses legal developments in three liberal democracies that have been at the forefront of promoting exclusion measures: the United Kingdom, the United States, and Switzerland.
Visa hela texten