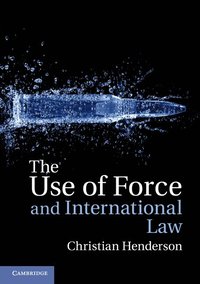 The Use of Force and International Law

av Christian Henderson
Häftad Engelska, 2018-05-10
Studentlitteratur
384
Köp
Spara som favorit
Finns även som
Visa alla 3 format & utgåvor
The Use of Force and International Law offers an authoritative overview of international law governing the resort to force. Looking through the prism of the contemporary challenges that this area of international law faces, including technology, sovereignty, actors, compliance and enforcement, this book addresses key aspects of international law in this area: the general breadth and scope of the prohibition of force, what is meant by 'force', the use of force through the UN and regional organisations, the use of force in peacekeeping operations, the right of self-defence and the customary limitations upon this right, forcible intervention in civil conflicts, and the controversial doctrine of humanitarian intervention. Suitable for advanced undergraduate and postgraduate students, academics and practitioners, The Use of Force and International Law offers a contemporary, comprehensive and accessible treatment of the subject.
Visa hela texten

'The book is an excellent example of the 'positivist-objectivist' approach to interpreting the international law on the use of force. The result is a comprehensive and even-handed treatment of the many complex arguments on the urgent issue of our time, the legality of resort to military force.' Mary Ellen O'Connell, University of Notre Dame, Indiana

'As Professor of International Law at the University of Sussex and co-editor-in-chief of the Journal on the Use of Force and International Law, Christian Henderson comes from a position of exceptional expertise to explore the framework for the use of force by states. On the one hand, a state is forbidden from utilizing force against foreign states in an aggressive manner; but on the other, a sovereign entity is entitled to defend itself. Overarching this is the moral obligation to protect civilians and jus cogens norms. In light of this complexity, Henderson's practical exploration of the international law governing the resort to force provides an enlightening and practical perspective on the topic ... Overall, I would recommend this book.' Kathryn Allinson, Leiden Journal of International Law

'Henderson's book presents the competing views on many of these issues in a thoughtful, balanced, and scholarly manner, which makes the book highly suitable for use in teaching an advanced level course. As a whole, this is a deeply researched, comprehensive, and erudite contribution to the literature on the law governing recourse to force.' Allen S. Weiner, The American Society of International Law

'Henderson's book offers a comprehensive, pragmatic, thoroughly argued, and helpful access to the world of the ius contra bellum, precisely identifying and squarely addressing undeniable problems that rules governing the use of force face ... It will thus equip international lawyers at any level to critically engage with the use of force in international relations, to take upon future challenges and rene the law from a solid basis, and to defend it against death threats.' Benjamin K. Nussberger, Journal of Conict & Security Law

'The Use of Force and International Law is a book that oers signicant coverage of the topic without falling into the trap of being overly dense, meeting its primary goal of acting as an introduction for those who are new to the subject while also providing analysis at a level that will inform the work of established ad bellum scholars. It soon will be appearing on the reading lists for my students.' James A. Green, International and Comparative Law Quarterly

Part I. The Prohibition of the Threat or Use of Force: 1. The general breadth and scope of the prohibition; 2. The meaning of 'force'; Part II. The Use of Force in the Context of Collective Security: 3. The use of force under the auspices of the United Nations; 4. Issues in relation to authorisation by the UN Security Council; 5. Peacekeeping and the use of force; Part III. The Use of Force in Self-Defence: 6. General aspects of the right of self-defence; 7. Preventative self-defence; 8. Self-defence against non-state actors; Part IV. Forcible Intervention in Situations of Civil Unrest: 9. Consent to intervention and intervention in civil wars; 10. The doctrine of humanitarian intervention; Conclusions; Index.