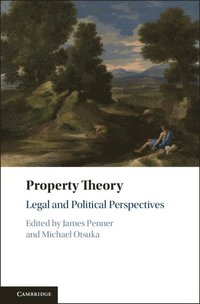 av James Penner
Häftad Engelska, 2018-08-30
349
Köp
Spara som favorit
Finns även som
Visa alla 3 format & utgåvor
Property, or property rights, remains one of the most central elements in moral, legal, and political thought. It figures centrally in the work of figures as various as Grotius, Locke, Hume, Smith, Hegel and Kant. This collection of essays brings fresh perspective on property theory, from both legal and political theoretical perspectives, and is essential reading for anyone interested in the nature of property. Edited by two of the world's leading theorists of property, James Penner and Michael Otsuka, this volume brings together essays which consider, amongst other topics, property and public law, the importance of legal forms in property theory, whether use or exclusion are most essential to our understanding of property, distributive justice, Lockean and Grotian theories, the common ownership of the Earth, and Confucian ideas of property.
Visa hela texten

James Penner is Kwa Geok Choo Professor of Property Law and Vice Dean for Research in the Faculty of Law at the National University of Singapore and a Barrister of Lincoln's Inn. Professor Penner has written extensively on the law of trusts, private law more generally, and the philosophy of law, with special interests in the philosophical foundations of the common law, legal reasoning, and property theory. He is the author of The Idea of Property in Law (2000), which won the SPTL first prize for outstanding legal scholarship (now renamed the 'SLS Birks Prize). He edited (with Henry S. Smith) The Philosophical Foundations of Property Law (2013) and is author of Property Rights: A Re-Examination (forthcoming). Michael Otsuka is a professor in the Department of Philosophy, Logic and Scientific Method at the London School of Economics. His research interests encompass political philosophy, political economy and normative ethics. He is the author of Libertarianism without Inequality (2003), in which he explores the relations among self-ownership, world-ownership, and equality from a Lockean left-libertarian perspective.