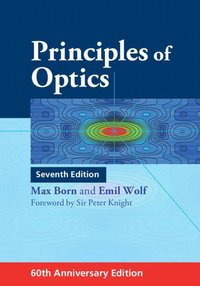 av Max Born
Inbunden Engelska, 2019-12-19
717
Köp
Spara som favorit
Finns även som
Visa alla 1 format & utgåvor
Principles of Optics is one of the most highly cited and most influential physics books ever published, and one of the classic science books of the twentieth century. To celebrate the 60th anniversary of this remarkable book's first publication, the seventh expanded edition has been reprinted with a special foreword by Sir Peter Knight. The seventh edition was the first thorough revision and expansion of this definitive text. Amongst the material introduced in the seventh edition is a section on CAT scans, a chapter on scattering from inhomogeneous media, including an account of the principles of diffraction tomography, an account of scattering from periodic potentials, and a section on the so-called Rayleigh-Sommerfield diffraction theory. This expansive and timeless book continues to be invaluable to advanced undergraduates, graduate students and researchers working in all areas of optics.
Visa hela texten

'Today, the word 'optics' has been generalized to include all methods that understand, and exploit our understanding of, electromagnetic radiation, from radio waves to X-rays and gamma rays. Since the 1st edition published in 1959, one year before the advent of the laser, Principles of Optics stands out as the most influential, mathematically rigorous, and frequently cited treatment of classical optics. It spans topics as diverse as the geometric theory of aberrations to the rigorous treatment of diffraction theory and has served as the foundational reference work for many practitioners of optics, from physicists to optical to microwave engineers. As a University of Rochester undergraduate alumnus who was privileged to take Emil Wolf's electricity and magnetism course, I am especially delighted to see the 60th celebration of the 1st edition and the 20th anniversary of the 7th edition of this masterpiece.' Steven Chu, Stanford University, Nobel Prize in Physics 1997

'Since I have long had laboratories in two places, Gttingen and Heidelberg, I own not one but in fact two copies of this definitive compendium, for it should be on the shelves of any theorist and experimentalist working in optics.' Stefan W. Hell, Max Planck Institute for Biophysical Chemistry, Gttingen, and Max Planck Institute for Medical Research, Heidelberg, Nobel Prize in Chemistry 2014

'The anniversary issue of Born and Wolf invites reflection on how important this classic has been and continues to be. I learned optics in the last century, at the beginning of the laser revolution that breathed exciting and vibrant new life into what had become a crusty old subject. The optics I learned as a student had an antique, nineteenth-century feel. The optics I confronted as a researcher was explosive in its modernity, with Born and Wolf as the guidebook. Today, no optics practitioner's bookshelf is complete without Born and Wolf. For answers in classical optics, this is the first stop.' William D. Phillips, National Institute of Standards and Technology, and University of Maryland, Nobel Prize in Physics 1997

'I fondly remember Emil Wolf's genuine kindness. For example, he offered me a ride in a snow storm without recognizing that I was a student walking to his class.I wouldn't be without Principles of Optics in my office.So many times I have used it to better understand an optics concept that I am either teaching or using in my own research.' Donna Strickland, University of Waterloo, Nobel Prize in Physics 2018

'The book is really a graduate-level textbook, starting with the electromagnetic field description of optics, and ending with a chapter on the optics of metals and crystals. But undergraduates, too, may gain insight, for example from the discussion of image-forming instruments. Also noteworthy are the 12 appendixes, which add great utility to the volume. This jewel of 20th-century physical science belongs on every scientist's book shelf.' J. Lambrop...

Max Born was one of the most distinguished and influential physicists of the twentieth century. Although he was awarded the Nobel Prize for his fundamental researches in quantum mechanics, he made also substantial contributions to other branches of physics, for example to the theory of lattice dynamics of crystals. He created a leading school of theoretical physics at Gttingen University, which had a major impact on the development of physics. From 1936 until his retirement in 1953 he was the Tait Professor of Natural Philosophy at the University of Edinburgh. Born was a prolific writer, who published about 360 papers and 30 books. He received numerous honors apart from the Nobel Prize; he was elected Fellow of learned academies throughout the world and he was awarded many honorary degrees. Emil Wolf was the Wilson Professor of Optical Physics at the University of Rochester. He received B.Sc. and Ph.D. degrees from Bristol University and a D.Sc. degree from the University of Edinburgh. He joined Max Born there in 1951 to collaborate with him in the writing of Principles of Optics. He was Max Born's last assistant. In addition to Principles of Optics, Professor Wolf was the co-author, with Professor Leonard Mandel, of a comprehensive text Optical Coherence and Quantum Optics, and he was the editor of a well known series, Progress in Optics. His numerous contributions to optics are well known and have been recognized by many awards, including seven honorary doctorates. Professor Wolf was President of the Optical Society of America in 1978 and was an honorary member of that society, as well as of the Optical Societies of India and Australia.