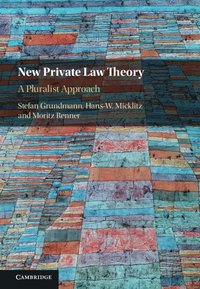 av Stefan Grundmann
Inbunden Engelska, 2021-03-18
1349
Köp
Spara som favorit
Finns även som
Visa alla 2 format & utgåvor
New Private Law Theory opens a new pathway to private law theory through a pluralistic approach. Such a theory needs a broad and stable foundation, which the authors have built here through a canon of nearly seventy texts of reference. This book brings these different texts from different disciplines into conversation with each other, grouping them around central questions of private law and at the same time integrating them with the legal doctrinal analysis of example cases. This book will be accessible to both experienced and early career scholars working on private law.
Visa hela texten

'Private law tends to suffer, notoriously, both from an identity problem (what exactly is private about private law?) and a form of tunnel-vision (its stakes are merely technical) that disqualifies it as irrelevant in the 'age of the post'. This may be why the most vital contemporary issues, from climate change to financial markets, are entrusted to public-style regulation. This book is a timely proposal to inject interdisciplinarity, pluralism and critical thinking into a 'new private law'. After so much of the world's human and natural resources have been extracted with the often invisible complicity of the 'old' private law, such a move may prove crucial now for the constitution of law's moral economy.' Horatia Muir Watt, Professor at Ecole de droit, Sciences-po

'The treatise of Grundmann, Micklitz and Renner contains the first comprehensive discussion of American and European essays which have influenced and continue to influence legal thinking. It juxtaposes, at times radically different, theories which prompts one to reflect on what ultimately counts in private law theory. Whatever one's theoretical position is, one will find inspiration in this book.' Lorenz Khler, Lehrstuhl fr Brgerliches Recht, Zivilprozessrecht und Rechtsphilosophie, Universitt Bremen

'Private law can no longer be the 'law of the market' as it was in its formalist heyday. It must evolve in response to the multiple risks, verging on the existential, which our current model of social and economic organisation is generating. New Private Law Theory is a response to this challenge. As set out in this major work, it is pluralist, comparative and interdisciplinary, while retaining a close focus on the interpretive core of legal method. This is the applied private law theory we need for our times.' Simon Deakin, Professor of Law, University of Cambridge

'New Private Law Theoryis an astonishingly wide-ranging and perceptive book, which applies a vast array of methods - from Guido Calabresi's economics through Niklas Luhman's social theory to Michel Foucault's philosophy - to an equally broad set of concrete legal cases - from products liability through loan contracts to sports arbitration.Throughout, the book simply brims with insights and ideas.It will open the eyes of law students and reinvigorate the thinking of established scholars.' Daniel Markovits, Guido Calabresi Professor of Law, Yale Law School

Stefan Grundmann is Professor at Humboldt-University, Berlin, for Private and Business Law, and at the European University Institute, Florence. He co-founded SECOLA (the Society of European Contract Law) and is president of the European Law School (Berlin/London/Paris/Rome/Amsterdam). His research focus is on contract, banking and company law, on regulation, governance and theory. Hans-W. Micklitz is Professor for Economic Law, Robert Schuman Centre for Advanced Studies, European University Institute, Florence and Finland Distinguished Professor at the University of Helsinki. His research interest focus on Private Law, European and International Economic Law, Private Law Theory. Moritz Renner is Professor of Civil Law, International and European Commercial Law at the University of Mannheim. His research focuses on transnational financial law and the economic sociology of law. Before joining the Law Department in Mannheim, Moritz Renner held a Lichtenberg Professorship at the University of Bremen.