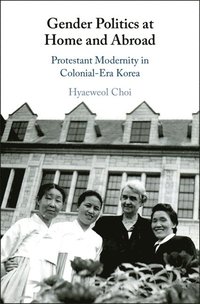 Gender Politics at Home and Abroad

av Hyaeweol Choi
Inbunden Engelska, 2020-07-30
829
Köp
Spara som favorit
Finns även som
Visa alla 2 format & utgåvor
Hyaeweol Choi examines the formation of modern gender relations in Korea from a transnational perspective. Diverging from a conventional understanding of 'secularization' as a defining feature of modernity, Choi argues that Protestant Christianity, introduced to Korea in the late nineteenth century, was crucial in shaping modern gender ideology, reforming domestic practices and claiming new space for women in the public sphere. In Korea, Japanese colonial power - and with it, Japanese representations of modernity - was confronted with the dominant cultural and material power of Europe and the US, which was reflected in Korean attitudes. One of the key agents in conveying ideas of "Western modernity" in Korea was globally connected Christianity, especially US-led Protestant missionary organizations. By placing gender and religion at the center of the analysis, Choi shows that the development of modern gender relations was rooted in the transnational experience of Koreans and not in a simple nexus of the colonizer and the colonized.
Visa hela texten

'Choi's ground-breaking study explores the transnational dynamics shaping the lives of elite Korean women under colonial rule. She traces how their active encounter with 'protestant modernity' at home and abroad nurtured their own rise as leaders who helped frame notions of domesticity, nationalism, and gender in 1920s-30s Korea.' Jan Bardsley, University of North Carolina, Chapel Hill

'By detailing transnational encounters beyond the colonizer Japan, this book offers a fresh, compelling account of Korea's transition to modernity. With its extensive research and carefully selected focus, it adds nuance and rigor to broader conversations about colonialism, modernity, and gender. A truly pathbreaking work - a must-read.' Ji-Eun Lee, Washington University in St. Louis

'Choi has done what every historian wishes s/he could accomplish - she has created a whole new paradigm by widening the circle of actors in her historical purview. Earlier works on Korean women in the colonial era have rightly examined gender at the intersection of modernity, Japanese colonialism, and Korean nationalism. But Choi adds a critical fourth component, the central role of non-colonial Western (mainly US) Protestant women, in molding the construction and discourse of Korea's gendered modernity. A must read!' Barbara Molony, Santa Clara University

Hyaeweol Choi is a scholar of gender history. She is the C. Maxwell and Elizabeth M. Stanley Family and Korea Foundation Chair in Korean Studies at the University of Iowa.