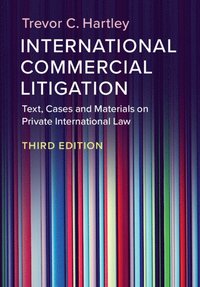 av Trevor C Hartley
Häftad Engelska, 2020-05-07
640
Köp
Spara som favorit
Finns även som
Visa alla 8 format & utgåvor
Taking a fresh and modern approach to the subject, this fully revised and restructured textbook provides everything necessary to gain a good understanding of international commercial litigation. Adopting a comparative stance, it provides extensive coverage of US and Commonwealth law, in addition to the core areas of English and EU law. Extracts from key cases and legislative acts are designed to meet the practical requirements of litigators as well as explaining the ideas behind legal provisions. Significant updates include coverage of new case-law from the Court of Justice of the European Union. Of particular importance has been a set of judgments on jurisdiction in tort for pure financial loss, many of which have involved investment loss. New case law from the English courts, including the Supreme Court, and from the Supreme Court of the United States, is also covered.
Visa hela texten

Trevor Hartley is Emeritus Professor of Law at the London School of Economics and Political Science, where he specialises in private international law and European Union law. He is a member of the American Law Institute, the Advisory Committee on Private International Law at the UK Ministry of Justice, and the European Group for Private International Law (GEDIP). He has written a number of books on law, including The Foundations of European Union Law, 8th edition (2014), Choice-of-Court Agreements under the European and International Instruments (2013) and Civil Jurisdiction and Judgments in Europe (2017).