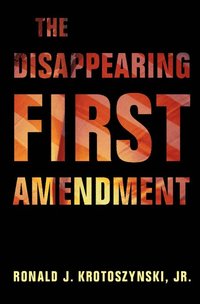 av Jr Krotoszynski Ronald J
Häftad Engelska, 2019-10-03
301
Köp
Spara som favorit
Finns även som
Visa alla 3 format & utgåvor
The standard account of the First Amendment presupposes that the Supreme Court has consistently expanded the scope of free speech rights over time. This account holds true in some areas, but not in others. In this illuminating work, Ronald J. Krotoszynski, Jr acknowledges that the contemporary Supreme Court rigorously enforces the rules against content and viewpoint discrimination for those who possess the wherewithal to speak but when citizens need the government's assistance to speak - for example, access to public property for protest - free speech rights have declined. Instead of using open-ended balancing tests, the Roberts and Rehnquist Courts have opted for bright line, categorical rules that minimize judicial discretion. Opportunities for democratic engagement could be enhanced, however, if the federal courts returned to the Warren Court's balancing approach and vested federal judges with discretionary authority to require government to assist would-be speakers. This book should be read by anyone concerned with free speech and its place in democratic self-government.
Visa hela texten

'Krotoszynski, Jr. convincingly advances a powerful thesis while at the same time offering the best available comprehensive account of how the freedom of speech has been interpreted and debated during the last few decades. He demonstrates in riveting detail how certain would-be contributors to public debate such as impecunious protestors, whistleblowers within government, and journalists have seen their First Amendment rights confined or rolled back in recent years even as the Supreme Court has recognized dubious new free speech rights which benefit business entities.' Vincent Blasi, Columbia University, New York

'Ronald J. Krotoszynski, Jr. tells the depressing story of how the Warren Court opened up the possibility for a First Amendment interpreted broadly to advance democracy in a modern society in which private power can dominate politics, only to have later Courts sharply narrow that possibility. Yet he also shows how existing doctrine can be developed to give us a First Amendment better suited to creating and supporting a truly democratic political culture. The argument is provocative and subtle, and deserves close attention.' Mark Tushnet, Harvard University, Massachusetts

'Freedom of speech isn't free, but it should be available to employees, not just employers, to people of modest means, not just the wealthy. So argues Ronald J. Krotoszynski, Jr. in this timely and trenchant critique of the Roberts Court. Krotoszynski, Jr. would reorient First Amendment jurisprudence away from the interests of the rich and powerful and back towards rules and standards that protect what Hugo Black once called 'the poorly financed causes of little people'.' Michael C. Dorf, Cornell University, New York

'This important book from one of the country's leading First Amendment scholars highlights pitfalls in modern First Amendment doctrine and suggests how courts can strengthen protections for our expressive and democratic interests.' John Inazu, Washington University

'Ronald J. Krotoszynski, Jr. has written an important corrective to the misleading narrative that Americans' expressive rights have unfailingly expanded. To the contrary, as he shows, the Supreme Court's rigid doctrines have shrunk our expressive topography, limited opportunities for transborder exchange, and stripped government employees and students of critical First Amendment rights.' Timothy Zick, College of William and Mary

'Constitutional scholars will find this text valuable in highlighting important, often ignored Supreme Court cases and in drawing connections between the court's subtle jurisprudential shifts and the democratic institutions the doctrine is intended to serve.' D. E. Smith, Choice

1. Two steps forward, one step back: on the decline of expressive freedoms under the Roberts and Rehnquist Courts; 2. The public forum doctrine and reduced access to government property for speech activity; 3. The First Amendment as a source of positive rights: the Warren Court and First Amendment easements to private property; 4. Whistleblowing speech and democratic accountability: the growing problem of reduced First Amendment protection for government employee speech; 5. Shedding their constitutional rights at the schoolhouse gate: the decline of freedom of speech for students and teachers in the nation's public schools, colleges, and universities; 6. Transborder speech: using the accident of geography as a makeweight justification for suppressing expressive freedoms; 7. Systemic failures to protect newsgathering activities by professional journalists and amateur citizen-journalists alike; 8. The citizen as government sock-puppet and the state masquerading as a citizen: the problem of coerced and mis-attributed speech; 9. Using constitutionally permissible statutes to impede first amendment activity: the Supreme Court's failure to address the abuse of discretionary authority by police, prosecutors, and other non-judicial actors; 10. Conclusion enhancing speech and promoting democracy: the necessary role of the state in promoting democratic deliberation among citizen-speakers; Index.